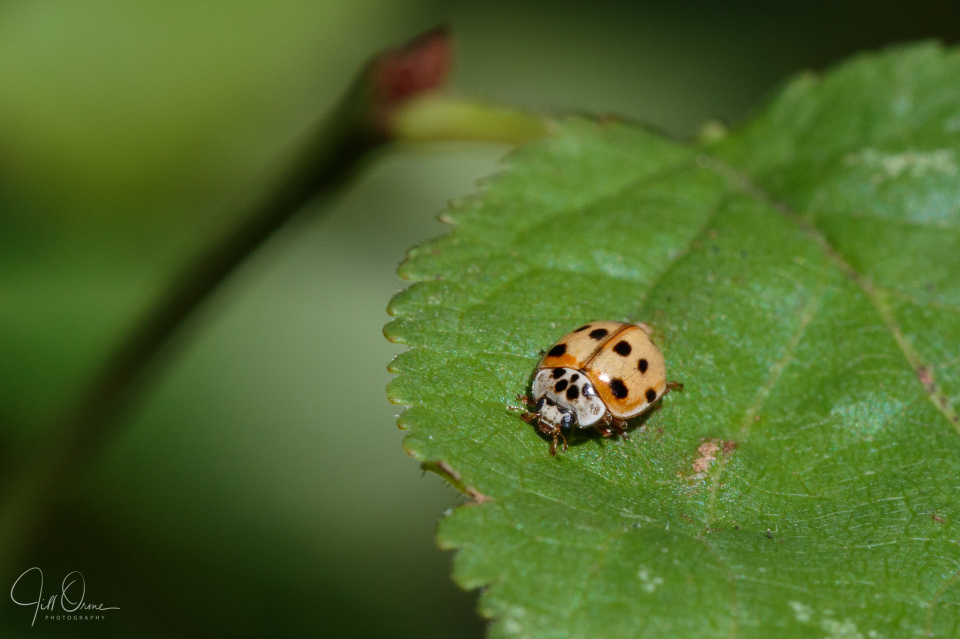 My back was still sore this morning, but improving, and by lunchtime I thought I was up to doing something useful, so I took a net and went to skim the wildlife pond of fallen leaves. The weather forecast had proved correct and it was a lovely day, so the sun flies were back at the pond and weren’t impressed that I was removing so many of their basking surfaces.

Helophilus pendulus aren’t the most irritable of the hoverflies, but they’re capable of making quite a grumpy noise when they’re whizzing round your head at high speed. I apologised, of course, but pointed out that it’s only a small pond, and already quite busily planted, and that I don’t think it’s a good idea to let it get choked up with rotting leaves. In the end we agreed to differ, I finished my work, they settled back down on other vegetation, and I put away the net and went off to see what other invertebrates might have been tempted out by the sunshine.

When I saw this little ladybird my first thought was that it was something I hadn’t photographed before, and my second – on noticing the brown legs and antennae – was that I was wrong, and it was just a harlequin. It was too small though, at less than half a centimetre in length, and something about the black spots on the pronotum caused my memory to twitch, so I photographed it with a view to checking the identification later. It wasn’t happy about being peered at, and flew away shortly after I took this, but I’m glad that I snapped it because it’s a ten-spot ladybird, and although in fact I have recorded this species in the garden before, I’ve only come across it twice, in 2016 and 2017.

The 10-spot ladybird is probably the worst-named of our native species, in that it’s fairly rare for it to actually have ten spots. This one has four plus a smudge on each wing case, which is pretty close, but they can have anywhere between no spots and fifteen, plus the five they may or may not have on the pronotum (the thoracic plate between the head and the wing cases). There are three main pattern types: this is the typical form, with black spots on an orange ground, but there’s also a chequered form in which the spots are so big that they appear to form a grid, and a melanic form which is largely black (including the pronotum), with just a couple of red splodges on the wing cases. Several other less common types also turn up (each with its own Latin tag), and within all the types there’s quite a lot of variation both of ground colour, and of the number, size and shape of the spots. This is a ‘gardeners’ friend’ species because it eats aphids; it’s found in deciduous woodland, parks, and gardens, and overwinters by hibernating in leaf litter.

I hope you were paying attention to all of that – I’ll be setting a test, last period tomorrow.

After my bug hunt I decided to go into Stratford and walk along the river. The little flock of twelve tufted ducks has now reduced to a splintered and very mobile group of eight, which had me dashing back and forth across the Old Tramway Bridge and up and down both banks, trying to keep up with their antics. They seem so unsettled that I predict they’ll all move on quite soon, unless another influx arrives to reinforce the flock.