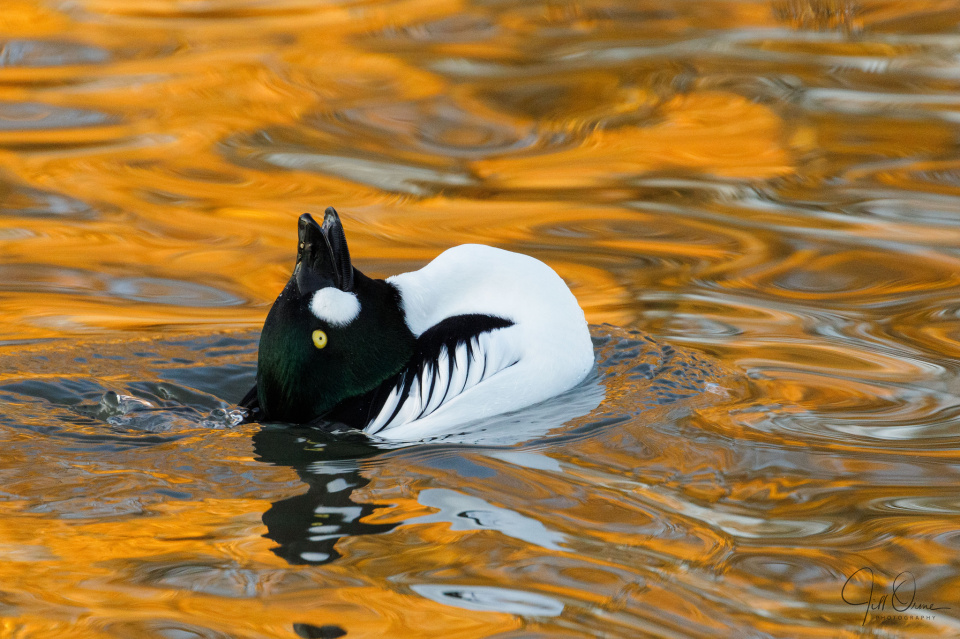 And there was light. And I thought… I’d better take advantage of this, because it might be the last I see this year. So I went to Slimbridge.

The male goldeneyes are fully dressed in their beautiful breeding plumage now, and their thoughts are turning to lurve. I’m always surprised by ducks displaying and attempting to pair off in the middle of winter, when they won’t actually breed until the spring, but I suppose they’re entitled to practise if they want to. There was a lot of toing and froing on this particular pond this afternoon, including some hysterical activity by a flock of black-headed gulls who were furious that they couldn’t get into the feeding cage, so I was pretty pleased to have caught this little chap doing his back-bends out on his own in a patch of lovely water.

The first time I ever saw a male goldeneye was at Draycote Water in Warwickshire, and I tracked it down by the extraordinary noise it was making. If you’ve never heard this call you can play it on the RSPB page – but to get the full effect you’ll need to turn up the volume until it can be heard from about half a mile away. At Slimbridge they don’t call very loudly, but with the females all to hand on the same pond, I guess they don’t really need to. 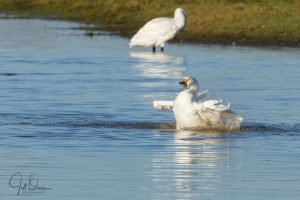 My extra shows a Bewick’s swan having a marvellous time, bathing and preening. Bathing swans are always good value, but this is the first time I’ve ever seen one repeatedly barrel-roll, waving its feet in the air, and staying inverted for several seconds at a time. If that sounds unlikely, I promise you it’s true, and invite you to view the evidence I’ve put on my Facebook page. According to the Slimbridge Twitter feed there are now 25 Bewick’s on site, several of them new arrivals during the course of this week, and I like to think that this one was freshening up after making the long and hazardous journey from Siberia, and was revelling in the sunshine and (relative) warmth of Gloucestershire.