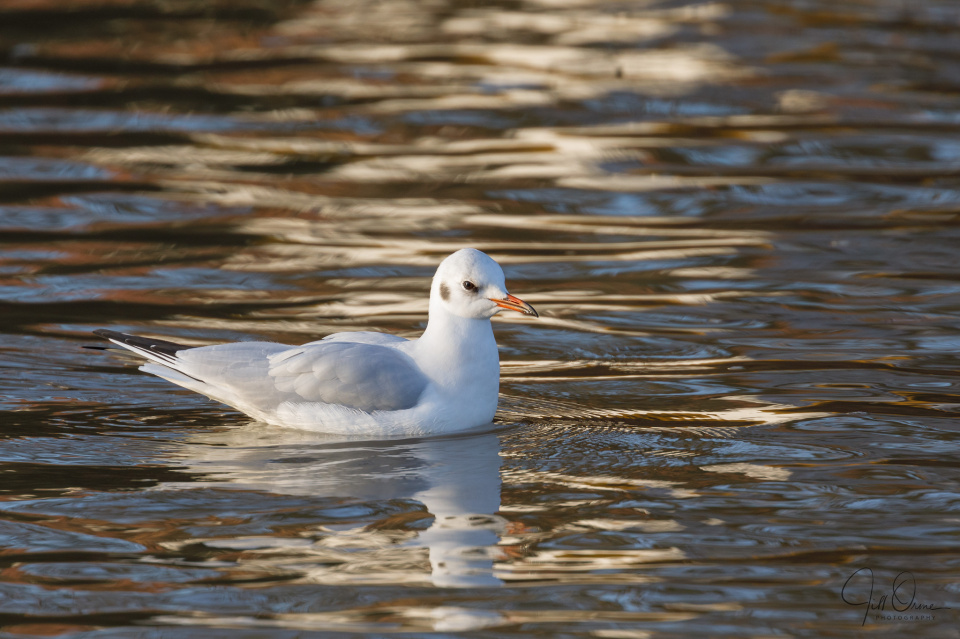 It was a murkily misty morning, but the forecast said we could expect sunshine this afternoon, so we spent the morning being domestic goddesses – R vacuuming, and me de-scaling the kettle and the shower heads – and then felt justified in taking ourselves off to Stratford for a walk and some coffee.

The promised fine afternoon having been delivered, I knew exactly the kind of light I was looking for, and I found it opposite the Royal Shakespeare Theatre. When the sun is low in the sky and the river isn’t too turbulent, the long lens creates an image of the water that looks as though you’ve painted it, and if you can add in some interesting reflections you have what I think is a pretty magical recipe. You then need a subject, of course, and as you’d expect I was looking for a tufted duck; but the ducks were playing on the other side of the river and the light there wasn’t especially interesting. Luckily, at this time of year there’s generally a black-headed gull somewhere about the place, and today this one drifted into my light and made a pretty good subject. I’d love you to view this full-screen, if you have the time.

Years ago I remember learning about what was then called beauty light, which was used in the 1930s and 40s by photographers such as George Hurrell to create some of the iconic images we all remember of Hollywood movie stars; it doesn’t seem to be referred to as that any more, but you can readily find tutorials on how to reproduce the effect. Essentially the technique involves flooding the face with hard light that falls away quite sharply into shadow, emphasising the features you want to bring out and isolating the subject from the background. It’s a deliberately artificial look, which is not generally an idea you’d associate with a nature image – but it works for me here, and I hope you like it too. 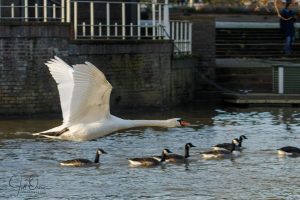 Interesting light aside, one of the more notable features of the Stratford stretch of the Avon at this time of year is the frequency with which swans fly up and down it. I don’t know why they’re more likely to fly in the autumn and winter than in spring or summer, but I wonder if it might be to do with parents trying to encourage their young to leave home before the next breeding season – the swan equivalent of giving your child a suitcase and a road atlas for their eighteenth birthday, perhaps. Whatever, when walking by the river it’s always worth keeping an ear cocked for the tell-tale creaking of large wings, and today I heard the approaching noise in time to wind in the zoom and catch the pen in my extra photo as she zipped through my patch of beauty light. I’d have preferred it to be picking out her face rather than her feet, but you can’t have everything.