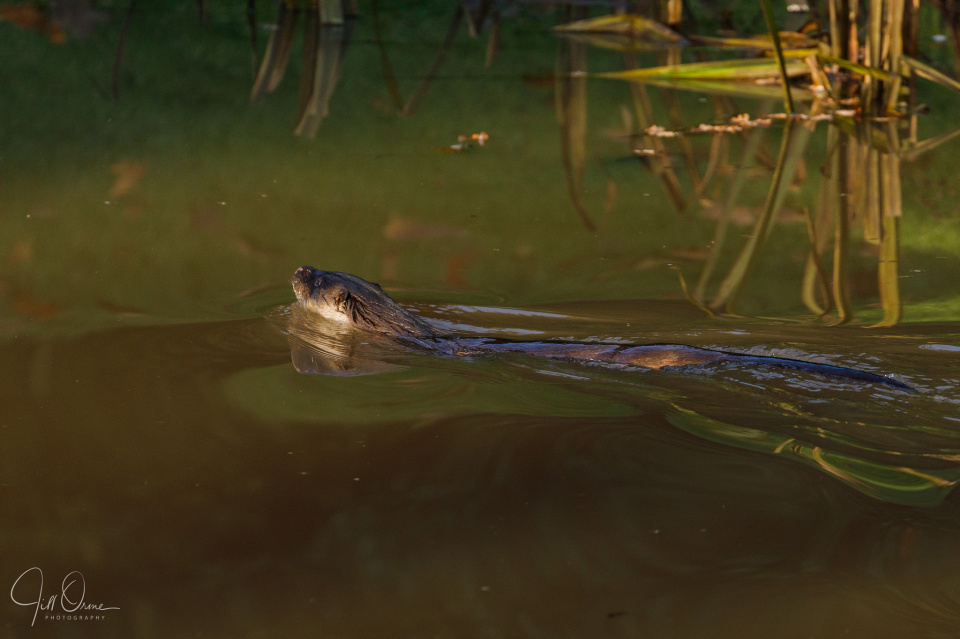 There have been otters at Croome since the spring – two adults and two kits were reported in the early summer, but they were elusive and you had to be lucky to catch sight of one. As you know, I spent a lot of time on the estate during the summer and early autumn, photographing dragonflies, and though I always checked near the Chinese Bridge, where their holt was said to be, I never saw one. Today though, R and I had the most wonderful encounter.

We’d walked most of the perimeter of the lake, and I was wandering along chimping at some photos I’d just taken of a swan, when he said, “Otter!!” and pointed at the bank close to the Dry Arch Bridge, where a large otter was sitting, apparently completely unconcerned by the fact that several people had stopped and were watching it from no more than a few feet away. I just had time to swing up the camera, sight, and take one shot (blurred), when it dived into the water and began to hunt. I was tracking its progress along the lake via bubbles in the water and furious movement of the reeds, when a voice behind us said, “Performing for the public!”, and we turned to find one of the grounds stewards watching the goings-on with great amusement. He told us that all the otters have now become so used to people that they’re liable to be seen at any time of day, and however busy the estate is – to the point at which he suspects they’ve begun to like all the attention they get. To prove the point, he showed us a terrific photo of one resting on a bank, that he’d taken from very close up with his phone.

I took both the main image and the extra from our original position on the further side of the lake to all the excitement – this one shows the otter making its way towards a reed bed, where the extra shows it out of the water, having caught something and brought it onto the bank to eat it. I should point out that in that second image it was eating its meal maybe eight or ten feet below a path, where at least half a dozen people were standing watching it. I couldn’t resist scuttling round to join them, by which time the otter was back in the water, and we all walked along level with it to the Grotto corner, where it did a little more performing among the reeds before swimming out across the lake to the island. 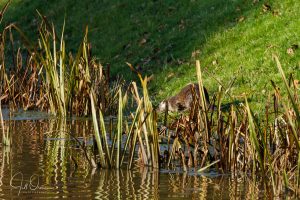 I regularly see captive otters because they have some at Slimbridge, but this is the first time in either of our lives that we’ve encountered a wild one. Though clearly, ‘wild’ is a relative term. I always worry when the normal relationship of wild creatures and humans is disrupted, because as we know, not all humans are trustworthy, and my delight at today’s experience was slightly tinged with disquiet. I can see how these otters might have come to be so extraordinarily self-confident: the watercourse at Croome is well-stocked with fish, some of them huge, and the only competition they have for prey are the three resident herons and an occasional visiting cormorant, so the living is easy, and they probably feel that the river and lake pretty much belong to them. I hope with all my heart that they continue to thrive.