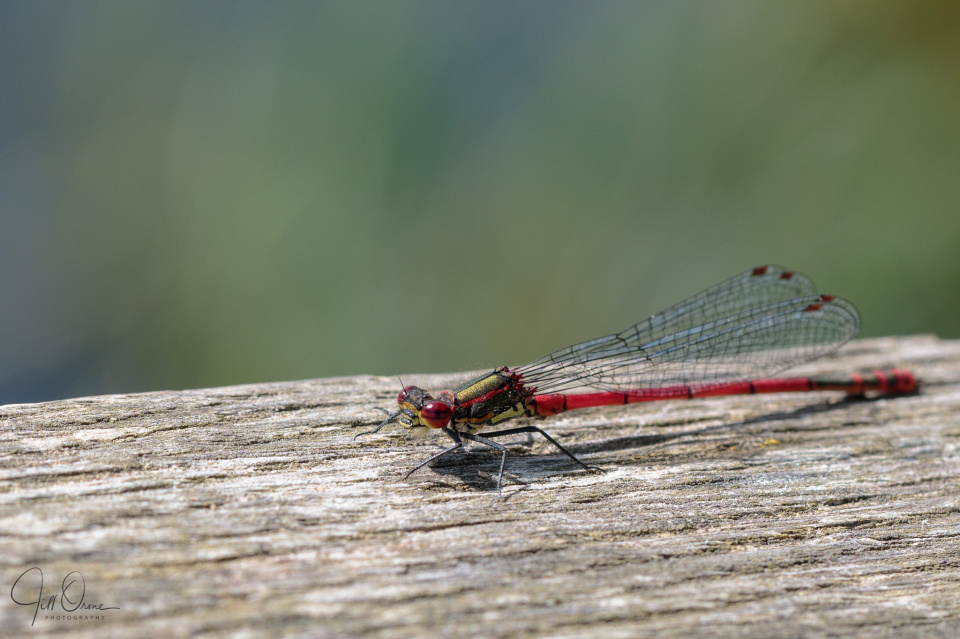 “Did you get him?” enquired the Croome steward, of the woman lugging two cameras across the Chinese Bridge.

“Yes!” he said, in that tone of voice that means What else would I be talking about?

You may have spotted that the lack of any Odonata in my life over the past few weeks has been causing me some irritation; but happily that state of affairs was remedied this morning, when R and I went to Croome and I photographed five different flavours of damsel: Large Red, Common Blue, Red-eyed, Azure, and a Violacea form Blue-tailed female. I’m not saying that any of the photos were actually good – certainly none of them is shrieking ‘A’ panel – but I was able to start getting my eye back in, and had fun doing it.

I’ve lain full length on wet grass to get to within a couple of feet of a teneral red-eye, and struggled to get up again with any dignity. While trying to get an angle on a pair of ovipositing Large Reds, I’ve gone too far down a steep bit of bank, discovered that the ground ended rather sooner than I was expecting, and wound up with one foot in the lake – and then, finding that the grass was too slippery for me to get purchase with my feet to push myself back to safety, I’ve saved the cameras by reaching behind me and placing them where they couldn’t roll, before shuffling ignominiously back up to level ground on my bum. And I’ve leaned so far out over the lake to get to another Red-eye that was basking on a floating leaf, that a couple sitting in deck chairs behind me started running a book on the chances of me winding up face-down in the water. And I’ve done it all wearing a big grin. Because dragons.

This Large Red Damselfly gets the nod today because he was the first of my season, spotted resting on the handrail of the Chinese Bridge. I was trying to edge round to get all of him within the plane of focus (as required by camera club judges and RPS assessors), but he was having none of it, and removed himself to somewhere with fewer obvious predators. I don’t care though – I like him, even if he’s not fully in focus. And even though he’s definitely not an otter.