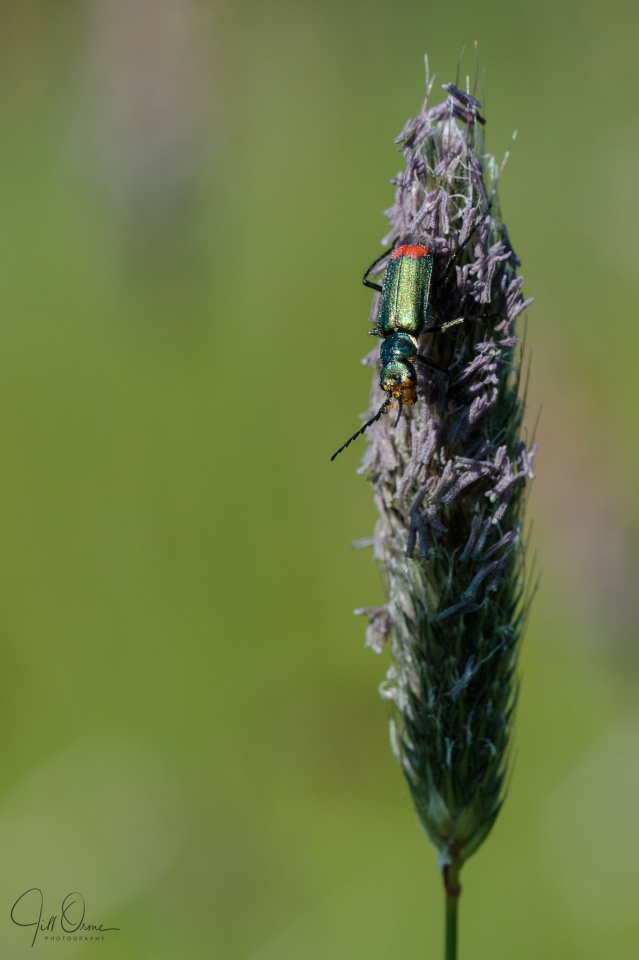 After a wonderful breakfast this morning, R and I said goodbye to the Howard Arms and drove over to Witney, where we collected – and thus became responsible for – The Dress. I’d like to tell you that this did not send my stress level through the roof, but if I did I’d be lying.

Back at home, after rebuilding one end of the house around The Dress, I matted five competition photos (said she, casually), and then took the macro and went for a bug walk. In the meadow we still call Tilly’s field, after a long-defunct horse that used to graze there, I was attracted to the purple flower heads of this grass, which I’m told is meadow foxtail. There was a gusty breeze blowing, which isn’t ideal for macro photography of things with long stems, but I was kneeling down, trying (reasonably patiently) to achieve a decently-focused shot of one of the heads, when my eye was caught by this small iridescent beetle, about half a centimetre long, on a neighbouring grass – and I immediately switched to trying to achieve a shot of the bug.

There are two malachite beetles that look superficially similar, but given the distinct red patches on the ends of his wing cases, his wide pronotum (the back plate of his thoracic armour), and the bright blobby structures on his antennae (which you might just be able to make out if you view this full-screen), I’m confident that this is a male green malachite beetle, Malachius bipustulatus. The nodules on his antennae play a part in releasing the pheromones that he produces from scent glands on his head; females will eat the pheromone secretions during courtship, though they’ll only then go on to mate with him if they haven’t already copulated.

Adult beetles feed on nectar or pollen as well as small insects; but the larvae, which develop from eggs that are laid in the second half of the summer in grass tussocks or bark crevices, are entirely predatory. When threatened, these beetles produce defence odours from special sacs along the sides of their body – in one of my photos I can just make out some of these sacs, but he wasn’t sufficiently worried about me and my lens to inflate them. Sadly!