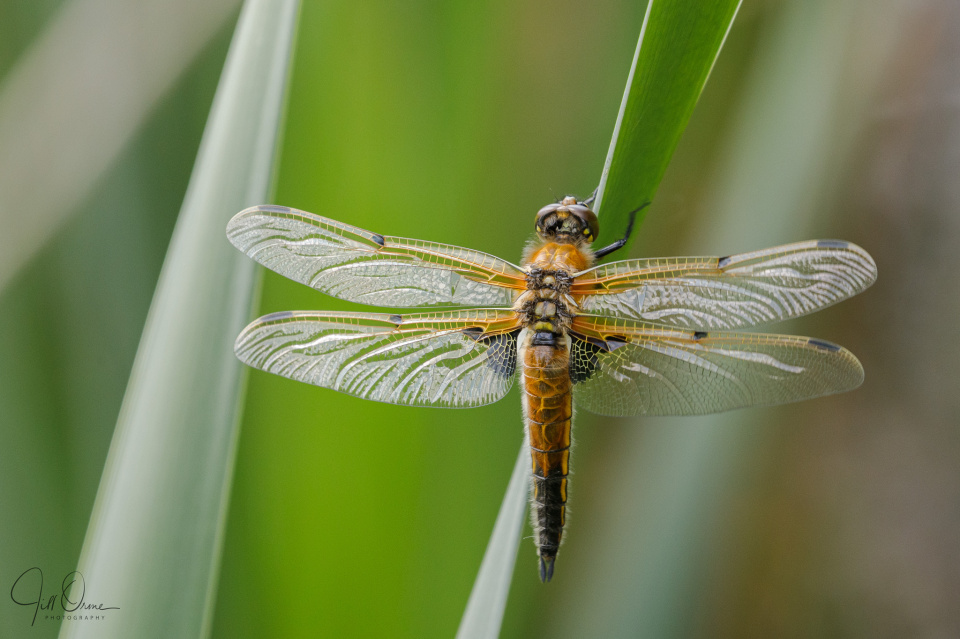 I had to go to Stow-on-the-Wold this afternoon for a haircut and, despite life continually tripping me up this morning, I managed to get out of the house early enough to swing round via the Cotswold Water Park first, in search of dragonflies. Because life, I was on quite a tight schedule, and (despite wilfully making myself late for the hairdresser) I didn’t manage to find my target species for the day. But I’m not even slightly downhearted, because I had the wonderful and unexpected experience of seeing part of a mass emergence of Four-spotted Chasers.

I was standing on a grassy area between a reed bed at the edge of a lake and a thick hedgerow, happily photographing damselflies, when first one and then a second chaser flew over my head from the direction of the lake, and disappeared into the hedge. Just then a couple of chaps turned up, each laden with as much gear as I was carrying, and told me that a couple of hours previously they’d watched around twenty Four-spotted Chasers take off out of the reeds; so we all stood and concentrated on the reed bed, and – sure enough – every few minutes a four-spot would rise up from some hidden spot where it had been drying its wings, and fly up into the trees to finish drying out and hardening. Most of them lifted away in one movement, but this one was still quite weak, and after rising a little way it came down again, and spent another minute or so doing short flights from reed to reed. Finally it took off properly, and went straight into an oak tree that overhangs the lake, where I was able to get some more photos of it among the young foliage.

Given the way I feel about dragonflies, seeing this was quite an emotional experience, and I was reluctant to tear myself away. But I was (dutifully) preparing to leave, when a third chap appeared, who turned out to be a nature photographer and an expert on this reserve; and he very kindly walked me down and showed me the best area in which to find the Hairy Dragonfly I’d been hoping to see. It was this detour that made me late for my haircut, and sadly by the time we arrived at the place favoured by the hairies, the sun had gone in and so had the dragons – but I’m very happy to have had his advice, which makes it much more likely that I’ll be successful on my next visit. The weather forecast for the next few days isn’t looking great for dragons, but I’ll be going back to Wiltshire as soon as possible.

My second-favourite shot of the day has gone onto Facebook. The first photo I took as I walked onto the reserve was of a Red-eyed Damselfly that happened to come down right in front of me as I walked towards the lake. She was too far away for me to use the macro, so I had to use the big gear; getting something that’s just 3.5cm long as sharp as that with 560mm of lens isn’t something that happens every day (at least, not to me), and it speaks to the fact that she’d placed herself perfectly parallel with the front element of the lens. I only mention this because it’s unusual: Odonata are pretty suspicious creatures, and it’s impossible to sneak up on them because of their wrap-around eyes – so they always know you’re there, and they generally like to keep you in front of them. I hope that this damsel survives her casual attitude to potential predators!