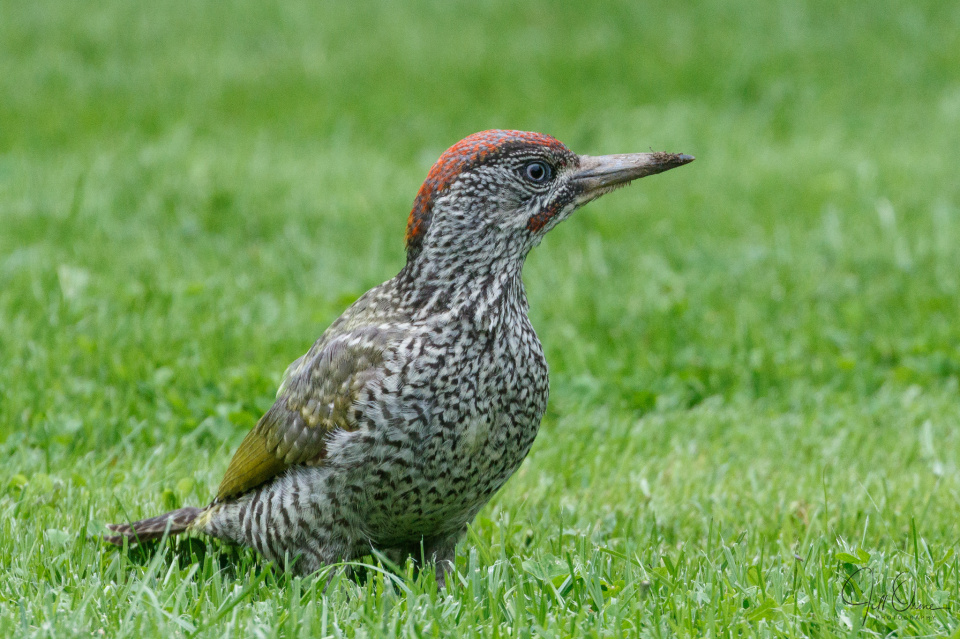 I had a rheumatology consultation by telephone this morning, as a result of which I had to go to Stratford hospital this afternoon, to collect some extra medication that we hope will deal with a recurrent joint flare. R drove me into town, and we walked along the river afterwards, but I spotted nothing much worth photographing.

As we reached home and drove into the back yard, R suddenly stopped the car and pointed out this juvenile green woodpecker, which was searching the lawn for ants. Just as he’d managed to manoeuvre the car to a position from which I could shoot through the side window, the silly creature hopped around behind a hebe and disappeared, but we knew it hadn’t flown away – they have a peculiar, low, undulating flight, often accompanied by their yaffling alarm call, which you really can’t miss – so we sat and waited, and after a few minutes it reappeared.

We quite often see green woodpeckers in the garden (where they’re extremely welcome to help themselves to as many ants as they fancy), and I think they probably breed either down in the wild garden or very close by, because during the late summer the adults will bring their fledged young to the top lawn and show them the best ant hills. But this one, which I think from the red moustache is a male, was on his own, and is therefore presumably learning to live independently. He’ll shortly begin to moult into his adult plumage, and should be fully transformed by November. R thinks he’s ugly at the moment, and I suppose you could say that he’s not the prettiest of children, but I have a soft spot for green woodpeckers and I’m happy to see that one pair at least has had a successful breeding season.