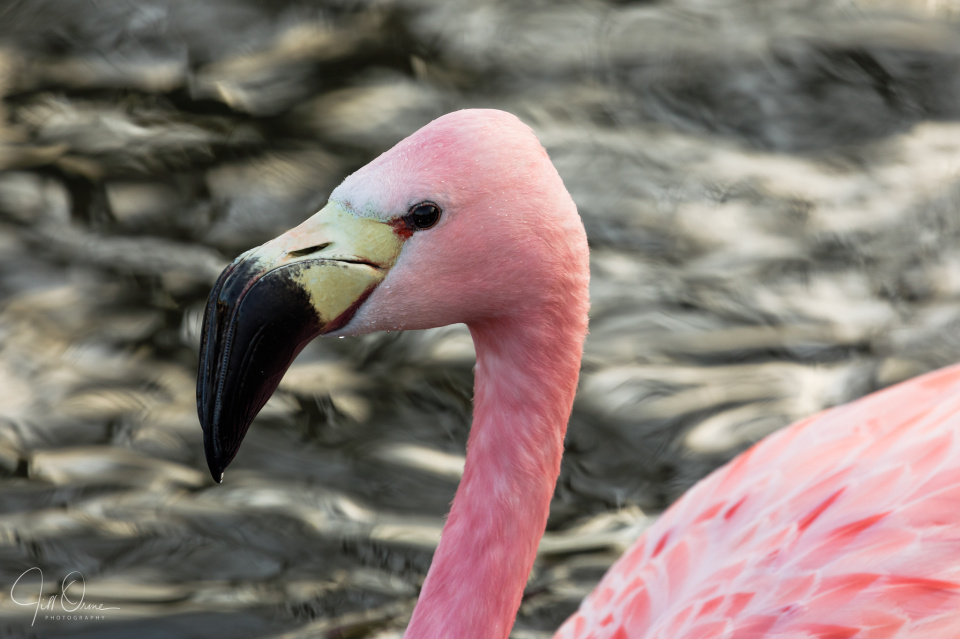 I chose a great day for a trip to WWT Slimbridge: even the staff were congratulating each other on today’s light, and though it wasn’t exactly warm, the temperature was pretty comfortable for walking around with heavy gear. I went looking for British birds, and found plenty; but I didn’t spend as much time in the hides as I’d hoped to, because I kept getting sidetracked by the exotic species on the various ponds.

This is an Andean flamingo, one of the six species which can be seen at Slimbridge. The Andean flamingo is an endangered species due to loss of habitat, pollution, and nest disturbance: the Peruvian wetlands that are its natural home are being heavily mined for borax, and it’s believed that the number of these flamingos in the wild has decreased by about a quarter over the last thirty years. Sadly the Slimbridge flock are not good breeders, but this year they did lay eggs for the first time in many years – and though their own eggs weren’t viable they were able to foster some Chilean flamingo chicks, and raise them successfully. Though I have more spectacular images of some of the other birds, I really like the way this delicate pink stands out against the almost monochrome bokeh.

My duck of the day today is a male Goldeneye. The last time I watched a Goldeneye doing this extraordinary back-bend it was at Draycote Water in Warwickshire, and I was so far away from the bird that the photo had to be cropped to within an inch of its life; today though, I was so close that I had to wind the zoom in. All of the male Goldeneyes were beginning to display, but the missuses were not yet impressed. When they begin to be impressed the males will also start to call, which will be quite a noisy experience to be close to, I would think – it’s a call that carries a very long way.

I was in a bit of a quandary about what to do with my bird list today, but in the end I decided only to list birds that are clearly wild – so for example I’m not listing the common cranes, because although the Slimbridge birds are a part of the South of England reintroduction project I’m not fully sure that they themselves are free to fly (I’ll have to see if I can track down some of the released birds on the Somerset levels, because those are definitely wild). More time spent in the hides would have given me a better ‘bag’, I suspect, but I still added another eleven species to my list. I almost had a twelfth, but shortly before I arrived a yellow-browed warbler flew into the glass surrounding the otter pool, fell stunned into the water, and wasn’t seen again.