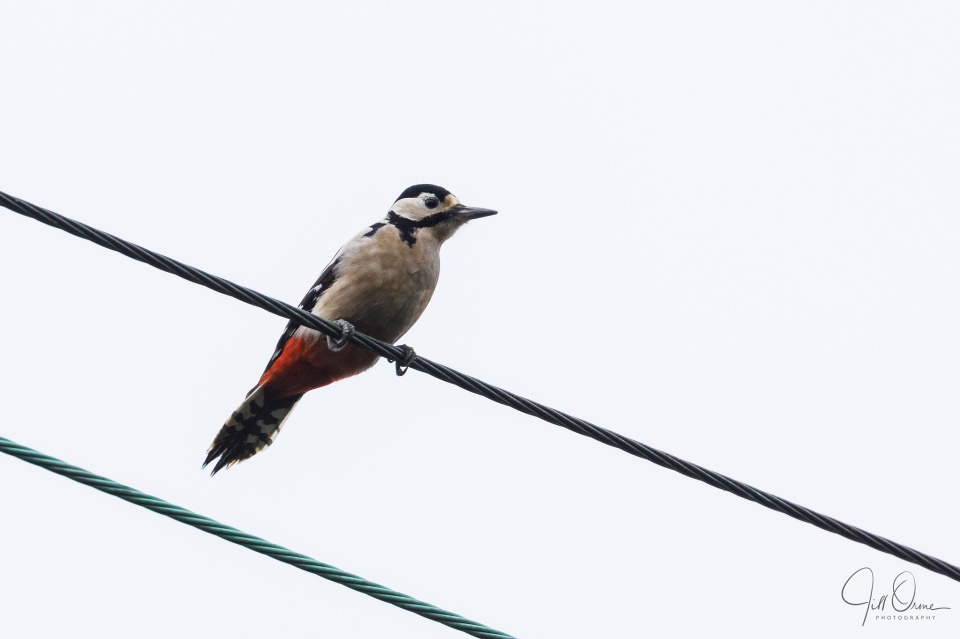 I’ll spare you the grimmer detail of my day, much of which was spent at my desk, hurling insults at the designers of WordPress. In my next life I shall build a proper web site, and the home page will work the way I want it to, rather than me having to adjust the design to work around a bizarre glitch in their coding. Sadly we are where we are, and I don’t have time right now to start again from scratch with a new site.

Eventually I made it out for a walk. There was almost no light by then, so I didn’t manage anything better than record shots, and I didn’t have anything like the necessary shutter speed to catch the sparrowhawk I disturbed out of a hedgerow, but at least I ticked a few more birds off my list. I was back in the garden, annoying a charm of goldfinches that had risen up from the feeders when I arrived, and were scowling down at me from a telephone wire, when this great spotted woodpecker swooped in and put them to flight. It took me a few seconds to work out what she was, because it’s highly unusual for a GSW to approach this close – you generally have to stalk them quite carefully. She looked a little scrawny though, so she was probably hungry; I think she’s likely to be one of last year’s juveniles, and they don’t seem to be fully on top of their environment yet.

Given my slight concern about this bird, it was a relief to see her half an hour later drilling the telephone pole in our neighbours’ garden – I’ve put a shot of this in as an extra. R and I both watched her for a couple of minutes, and it seemed as though she was trying to disturb prey from the pole rather than digging it out: she’d drill for a few seconds, scoot around the pole and check the holes on the other side, then repeat the process. I have my doubts, but I hope it’s a winning strategy. 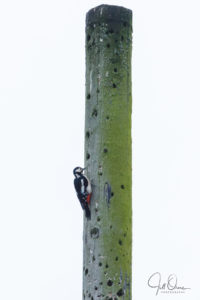