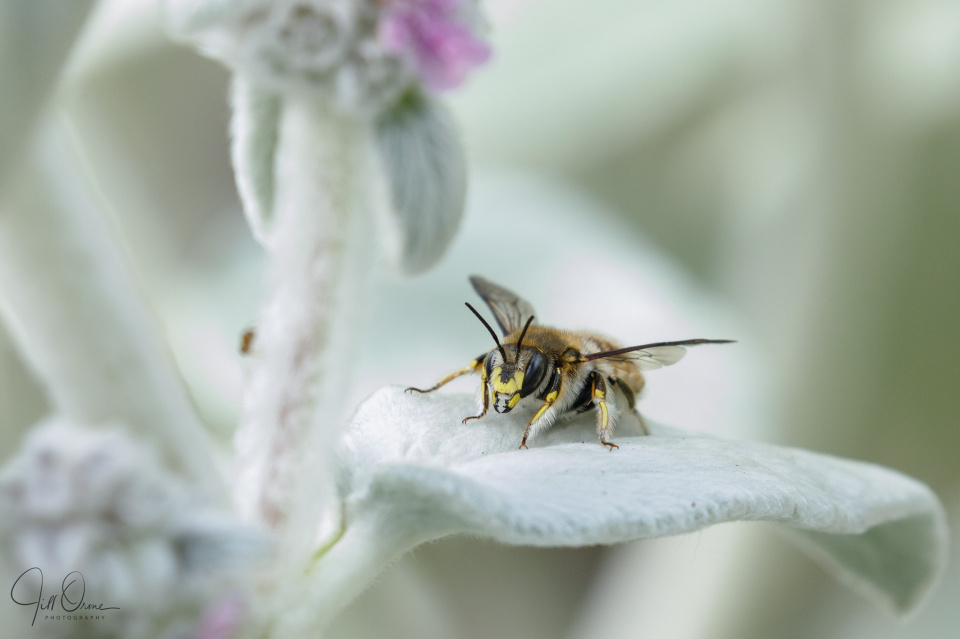 R and I went for an early morning walk around Hidcote Manor Gardens today, and saw two things neither of us had ever seen before.

The first was an Azure Damselfly emerging from her larval exoskeleton on a water lily, which was fascinating (it would have been even better to see her splitting her skin like the Incredible Hulk, but that’s just nitpicking). The process took quite a long time, of course, so we kept going off to look at other parts of the garden and then coming back to see how she was getting on, and by the end of our visit she’d moved from the outside of the lily to the inside, where she was fully in the sun, and beginning to harden up and display her markings. I’ve put a few photos of her here.

The second “first” was a clutch of wool carder bees on a large stachys plant; my main image is a male, and the extra shows the very brief copulation that took place after he spotted a female with her face in a flower and jumped her. I have to confess that I didn’t know what I was looking at, and even decided at one point that they must be hoverflies – because they are champion hoverers, and move much more like a hoverfly than a typical bee – but as soon as I uploaded my photos to a big screen I could see that the mandibles and antennae were completely wrong for a hoverfly, and it only took me a moment to find the species in my bee book.

Wool carder bees are so called because the females collect fibres from the leaves and stems of hairy plants to line and seal their nest cells. Unusually, they’re smaller than the males, which are big and bold – nearly 2cm in length – and aggressive towards other males of their own species, or any other insect they perceive as a threat. If you look at the extra you may be able to make out some spines at the end of the male’s abdomen; he can use these to kill an intruder to his territory, by bending his abdomen and crushing them between his abdominal spines and his thorax. We did witness a couple of clashes between rival males this morning, but happily not a fight to the death. Females are tolerated within a male’s territory because, of course, his primary instinct is to mate, but most of the ones we saw today were busy collecting pollen, and shrugged off his advances.

Wool carder bees are reasonably common in south-east England, though they become scarcer the further north or west you go. If you want to attract them to your garden, the advice is very simple: plant stachys.