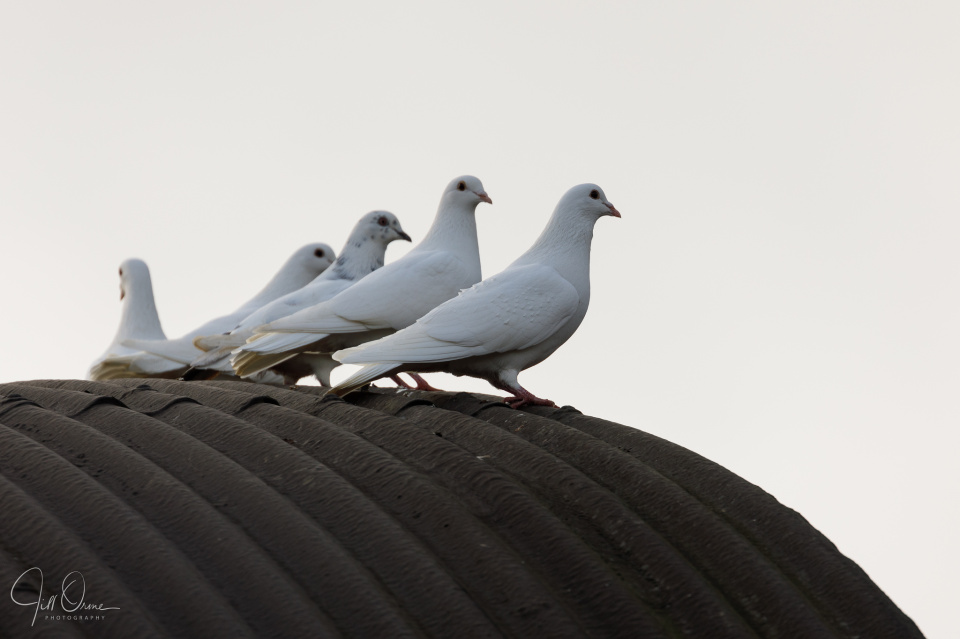 I’ve chosen to feature this photo because I don’t think I’ve ever taken anything quite like it before, and though I’m not sure why, I rather like it. I was walking out of a nature reserve in the Cotswold Water Park when a sizeable flock of doves (or more properly I think, white pigeons) swooped in and landed on the roof of a Dutch barn belonging to the adjacent farm – and then, two frames later, swooped out again. I don’t think I can add them to my list because they’re either domesticated or feral descendants of domesticated birds, and as such would be frowned on by proper birders.

The first extra shows another pair of birds that might be considered questionable, but which I am claiming as wild: the red-crested pochards I’d specifically driven south this morning to find, after seeing them on a CWP birding report. This is a European species, found primarily in Spain, but in smaller numbers through France and Germany; a few birds are believed to cross the Channel into south-east England, but most of the red-crested pochards in the UK are said to be either escapees from captivity or their descendants. So again, you could say that they’re feral – but on this occasion I’m using the word ‘naturalised’. Because it’s my list, and I say so. 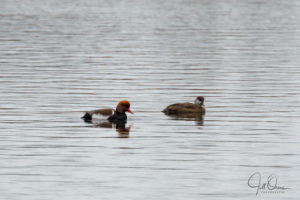 I can understand why the kind of people who own lakes and populate them with ducks might want to keep red-crested pochards. They’re large, distinctive birds; even the females are quite striking, and the males are positively flash. What you can’t see from this rather distant image is their mad-looking red eyes, so I’ve put in a second extra, taken at Slimbridge last week at closer quarters and in better light. Today there were around three dozen of these ducks on one particular pit of the CWP, many of them busily courting, so the ‘naturalised’ population looks set to increase still further. 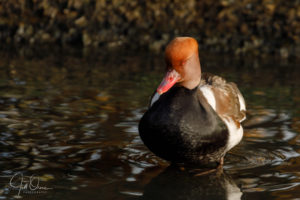 My last stop of the day in the CWP yielded around a dozen goldeneyes, also busily courting. They were so funny that I found myself laughing aloud at some of their antics – but sadly they were a long way from shore and the light was poor, so the film I tried to shoot on my phone didn’t come out at all, and even my still shots aren’t up to much. Nonetheless I couldn’t resist using them as a new banner on my Facebook page.