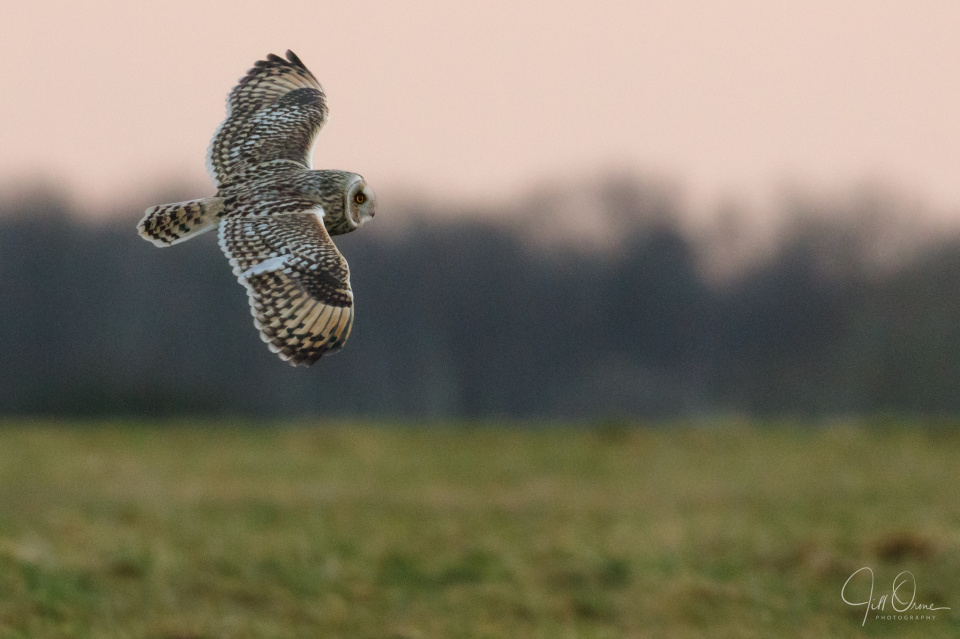 I left home in bright sunshine, but arrived at the owl field under a ferocious sky and scudding rain. After I’d lurked by a copse for half an hour, the cloud blew over and the field was suddenly bathed in bright sunshine, so I went for a walk to pick my photography spot. There were no owls to be seen anywhere.

Hillyblips then arrived, and we had an intense technical discussion about how and where and when the owls might fly, and whether or not we were standing in the right place. There were still no owls to be seen, but we began to not like the look of a very large rain cloud that was heading towards us. We decided to go back to the cars, but before we’d halved the 300m distance the rain reached us on a howling wind, and drove us the rest of the way.

By the time we got to the road the cloud had roared past us, the rain had stopped, and the place where we’d been standing was once again in sunshine. I decided to have a cup of tea from my flask, and then go home. HB went off to try the south side of the field, but by the time I’d finished my tea she was back, reporting that the photographers down there were crammed together like sardines, and hadn’t seen a single owl either. She went back out along the northern wall; I finished my tea, havered, havered some more, went for a walk, took some landscape shots, havered a while longer, and then plodded back through the copse and rejoined her. Because surely the owls were going to have to come out to eat sooner or later…? 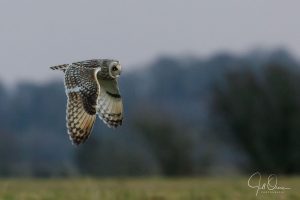 It turned out to be later – about half an hour before sunset, in fact. “Just a gull,” I said bitterly, as a pair of long, pale wings began to approach. “Oh – no. Not a gull – it’s Fat Furry Owl!” The light was so vile by this time that we were lucky it was Fat Furry Owl: if it had been Dark and Dangerous Owl I doubt we’d have got many photos, but the cameras were able to pick up the pale flash of FFO’s wingbeats and keep us madly shooting right through till sundown. Hillyblips has posted one shot of FFO hunting, and one of him/her defending a huge vole from a marauding kestrel, so I’ve gone for a couple of simple flight shots, both showing the unusual pale feather in the right wing that tells me this is definitely my favourite furry owl (see the second extra from this session). Below is my closest capture of the day, and I was pleased to have nailed it, but it’s not my favourite photo because I was shooting into the light. By the time I got back in the car I was pretty cold, despite the fact that I’d been wearing five layers of clothes (six if you count heavy back strapping), and my face felt as though it had been flayed. I foresee a pair of heated hand warmers in my future…