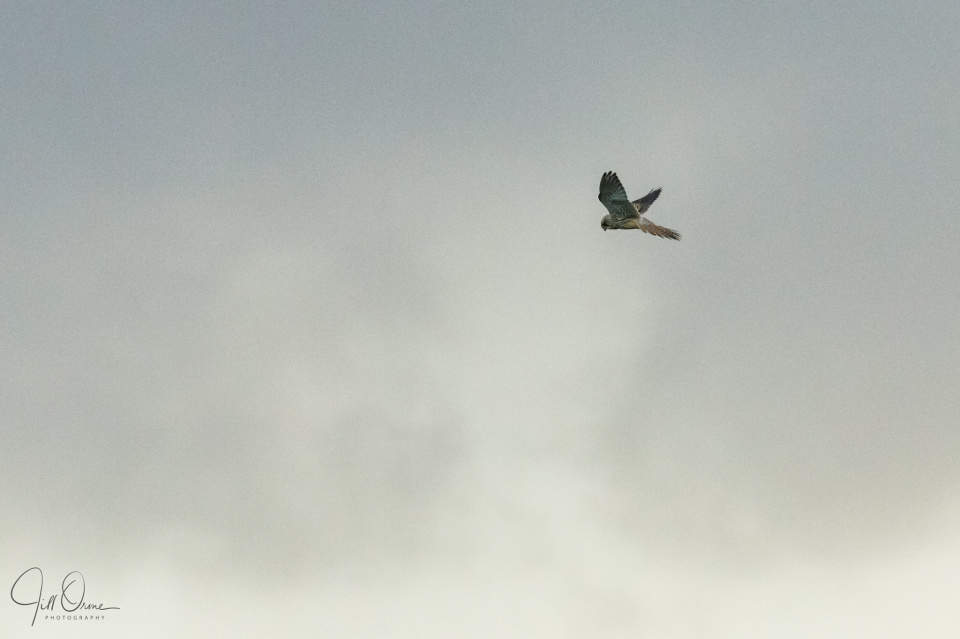 The weather this morning looked very promising for owling – right up until I reached the top of the Cotswold escarpment, when the sky blackened and the wind picked up. As you probably know, short-eared owls hunt largely by hearing, and if it’s too windy they can’t hear their prey, so hopes sank of a productive day. I had a long and enjoyable chat with one of the other regulars – a really excellent photographer, with whom I discovered some intersecting family/military history – but during all of our time standing at The Wall not a single photo was taken.

Eventually the need to get a photo, and to start my circulation moving, propelled me into a walk around the perimeter of the field, during which I caught a distant glimpse of a hen harrier, and captured a few shots of this kestrel hunting against a pretty ominous sky. The sky was not lying about its intentions, either: a few minutes later it began to rain, and I took shelter – nervously, because there was also thunder rolling across the scarp – in a small spinney.

After a couple of minutes two other regulars appeared, and we were standing comparing notes on a disappointing afternoon when the rain turned to pelting hail. At this point I was half a miserable, wet and icy mile away from my car, so I was extremely grateful that one of the other photographers offered to drop me back round to it; by the time we arrived the hail had gone over, and optimistic folk were gazing at a distant bright patch of sky and wondering if it might possibly be coming our way – but I was wet and cold, and decided that hot coffee was now higher on my agenda than owls, so I cut my losses and left.

It’s never just about the photos for me – but a day when this is the best photo I manage can’t be said to be a good one!