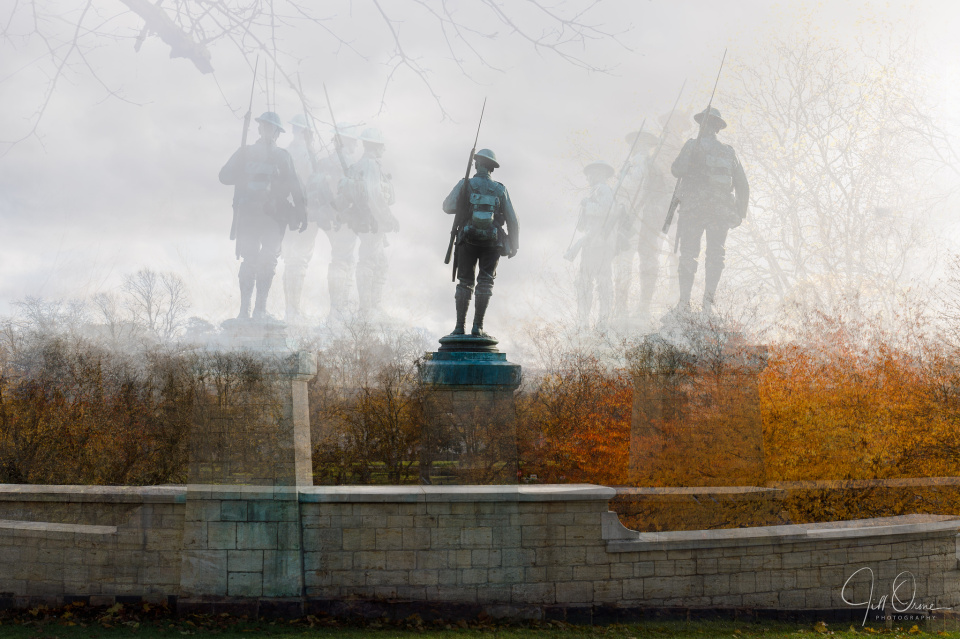 Down the close, darkening lanes they sang their way
To the siding-shed,
And lined the train with faces grimly gay.

Their breasts were stuck all white with wreath and spray
As men’s are, dead.

Dull porters watched them, and a casual tramp
Stood staring hard,
Sorry to miss them from the upland camp.
Then, unmoved, signals nodded, and a lamp
Winked to the guard.

So secretly, like wrongs hushed-up, they went.
They were not ours:
We never heard to which front these were sent.

Nor there if they yet mock what women meant
Who gave them flowers.

Shall they return to beatings of great bells
In wild trainloads?
A few, a few, too few for drums and yells,
May creep back, silent, to still village wells
Up half-known roads.

Wilfred Owen wasn’t one of those who made it back home after the end of the war: he was killed by a sniper as he supervised his men crossing the Sambre-Oise Canal, on 4th November 1918. His mother received the telegram informing her of his death on Armistice Day; she later wrote to the Bengali poet Rabindranath Tagore that before Owen’s final embarkation he had recited Tagore’s poem Parting Words to her, and when his belongings were returned to her the poem was written out in his pocket book.

This evening R and I watched Peter Jackson’s film They Shall Not Grow Old. If you haven’t already seen it and you get the chance, I urge you to seize it – it’s one of the most powerful documentaries I’ve ever seen. For people within the UK at least, it’s on iPlayer for the next six days.

And something else crossed my Twitter timeline today: a recording of the moment on 11th November 1918 when the guns stopped.

When I go from hence
let this be my parting word,
that what I have seen is unsurpassable.

I have tasted of the hidden honey of this lotus
that expands on the ocean of light,
and thus am I blessed
—let this be my parting word.

In this playhouse of infinite forms
I have had my play
and here have I caught sight of him that is formless.

My whole body and my limbs
have thrilled with his touch who is beyond touch;
and if the end comes here, let it come
—let this be my parting word.