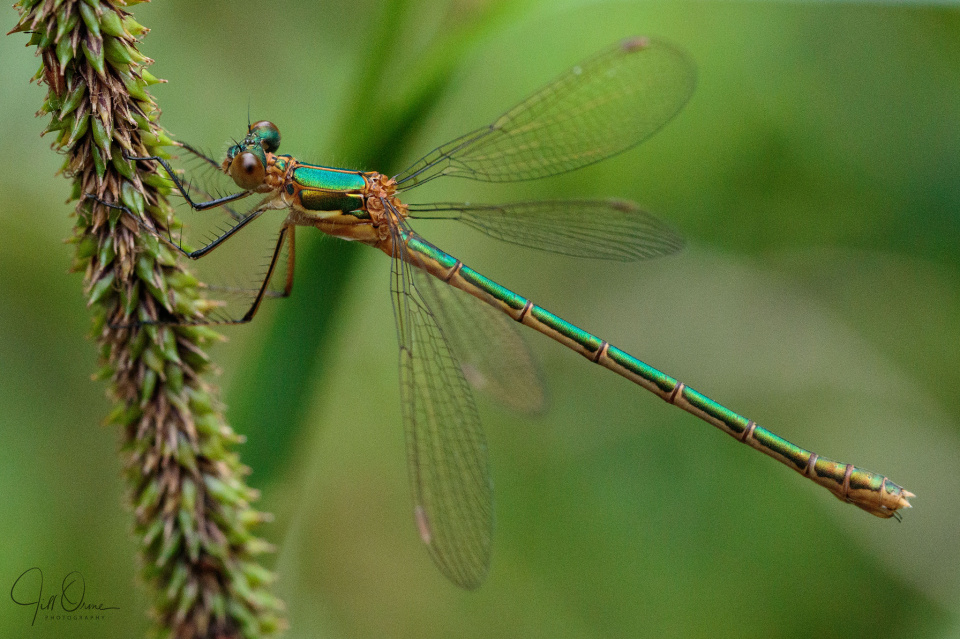 It was heavily overcast today, but surprisingly warm despite a stiffish breeze, and I thought it might be worth a trip to Trench Wood to see if the Emerald Damselflies were out. As you can see, they are, but while finding them was easy enough, photographing them was quite a different matter. Being fresh, they were very skittish, and disappeared the second you took your eye or your lens off them, and none of them was at all keen on being stalked. I’m relatively happy with the framing and focus here, but with the light as poor as it was I had to open the aperture and drop the shutter speed more than I usually would for damsels – and even so the ISO is through the roof, so it’s pretty grainy.

Still – it’s the first Emerald of the year for me, which feels like a bit of a Moment. This is a female, so although she will darken as she matures, she’ll stay green and won’t develop the blue pruinosity that characterises the males of this species; I didn’t see any males today, but I expect they’ll be out and about by my next visit. Which I’ve promised myself will be on a day with some light.

Another season’s first, almost unbelievably given the date, was the Common Darter I’ve posted to my Facebook page. There were several Darters around, but if anything they were even less cooperative than the Emerald Damselflies, so that’s a long lens shot, and heavily cropped.