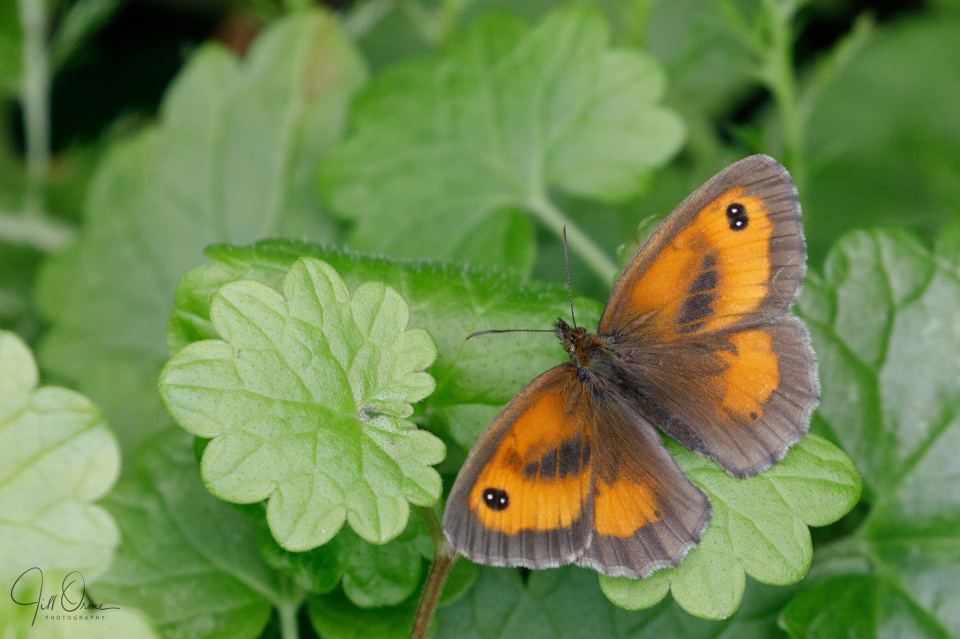 Today was another warm but windy day, with scudding clouds and bright though patchy sunshine. But despite the changeable conditions, the invertebrates couldn’t wait to come out to play after the recent dreary few days, and the garden was humming with insect activity. I spotted this male Gatekeeper – the first of the year here – resting on the ground cover in a long shrub border half way down the garden. Given his gender, which is shown by the dark brands on his forewings, he was surprisingly passive, and allowed me a couple of shots of his basking position, before snapping his wings shut and turning edge-on to me. 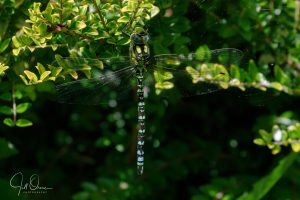 As it turned out, Mr Gatekeeper needn’t have worried that I was overly focused on him: while I was standing and waiting to see if he’d reopen his wings the Southern Hawker in my extra flew right between us, and my attention was immediately (and irretrievably) diverted onto the dragon. Although he’s more strongly marked now, I think this is the same male SH I photographed on Wednesday – he’s now hunting well, but still seems to need to rest quite frequently. After he’d paused just long enough for me to take his photo, he hurled himself off the shrub in a leftward swoop, and zipped round the corner into the wild garden.

Later in the morning I spent some time in the wild garden myself, doing a little light pond maintenance, and as well as the usual suspects I observed the following:

2 male Southern Hawkers, hunting around each other and occasionally having words;

1 female Beautiful Demoiselle, whose photo I was taking when one of the hawkers swooped towards her, at which point she beat a hasty retreat into the apple tree and didn’t reappear;

1 fresh male Holly Blue, working himself to a frazzle, looking for girls;

1 overflying Red Kite – rather shabby, but worthy of note as it’s the first I’ve seen crossing the village.

This afternoon R and I had a lovely Zoom with H, L, and G. The big news from Wales is that the English will shortly be allowed to visit; I can only hope that this is a decision that the Welsh won’t come to regret. Personally I’d like to move to Monmouth immediately and permanently, but if I went there wouldn’t be anyone to look after my dragons, so maybe I’d better stay put in the Shire just a little longer.