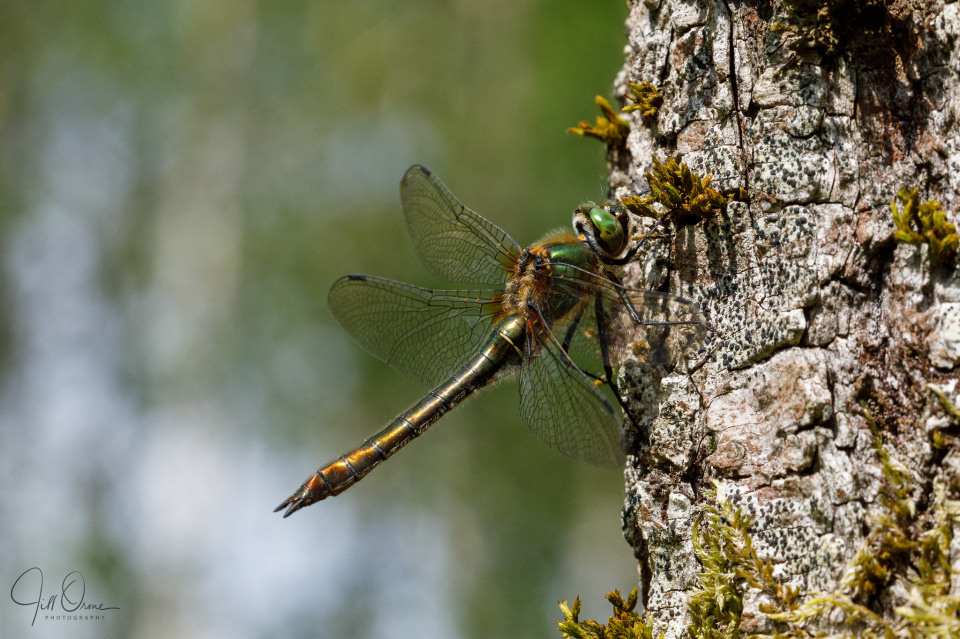 Time was when Lower Moor at Oaksey in Wiltshire was one of my my go-to summer places, because of the plethora of Odonata I could confidently expect it to provide. I didn’t visit during 2020 because of Covid, and then last year I went just twice, failed to get any good dragons, and fell rather out of love with the place. Ever since this year’s season began I’ve been havering (and mithering) about whether or not to pay another visit, and this morning I finally plumped and went. I’m very happy indeed that I did.

I improved my Odonata list for the year by two species almost immediately, spotting first a Red-eyed and then a Common Blue Damselfly by the gate between the car park and the education hut meadow. Once in the meadow I got into conversation with a chap who was also on a dragon quest, looking as I was for Downy Emeralds and Hairy Dragonflies – and within moments we’d ticked the former, when he spotted a Downy Emerald hunting and then perching in a little sunlit glade between the dipping pond and the exit to the main section of the reserve. As we were admiring it another appeared, and then at least two more, and we stood for several minutes watching them zooming around.

This was the start of what turned out to be a dragonfly bonanza. The mass emergence of Four-spotted Chasers from Mallard Lake, which I witnessed back in 2019, seems to have happened already, and we found dozens of them hanging out together (as they do when immature) in an orchard area nearby, along with several more Downy Emeralds, a single Broad-bodied Chaser, and scores of blue damselflies at every stage of development. It was interesting that the Downy Emeralds displayed an almost Zen-like calm when compared to the Four-spotted Chasers, which were hyper-reactive and rose in panic whenever you went anywhere near them, so that at times the air seemed to be filled with dragonflies. The Downy Emeralds by contrast would sit calmly even when you walked quite close to them, and if you stood and watched while they were flying hunting circuits would sometimes come right up close and hover in front of you for a couple of seconds, in the same way that Southern Hawkers will do.

The one disappointment of the day for me was that since I was last at Lower Moor the path I’ve always known as Dragonfly Alley has been opened right up into a broad ride, and so much vegetation has been cleared from alongside it that the little sunny glades the Downy Emeralds love to use for hunting and basking have now disappeared. On the plus side though, this clearance has opened up a section of woodland I’d never tried to get into before, and I discovered that there were so many Downy Emeralds hunting and perching in this area that they ended up bickering and barging each other off the best perches. The female in this photo flew right past my head, landed on the tree trunk in front of me, and then waited while I walked around to photograph her side-on, and given this level of cooperation (and her lovely green eyes) I felt that it would be rude not to feature her in my post tonight. I’ve put some other images here, if you’d like to see them.

It was as we were walking back towards the car park, via an encounter with some very active Hairy Dragonflies at the dipping pond, that I thought to ask my new acquaintance if he was on Twitter, and we discovered that in fact we already knew each other via social media – he being the person who runs the West Midlands Birding group on Facebook, and both of us belonging to other Worcestershire or Midlands-based wildlife groups. It’s not the first time this has happened to me, but yet I always managed to be surprised when my on line and off line worlds collide.