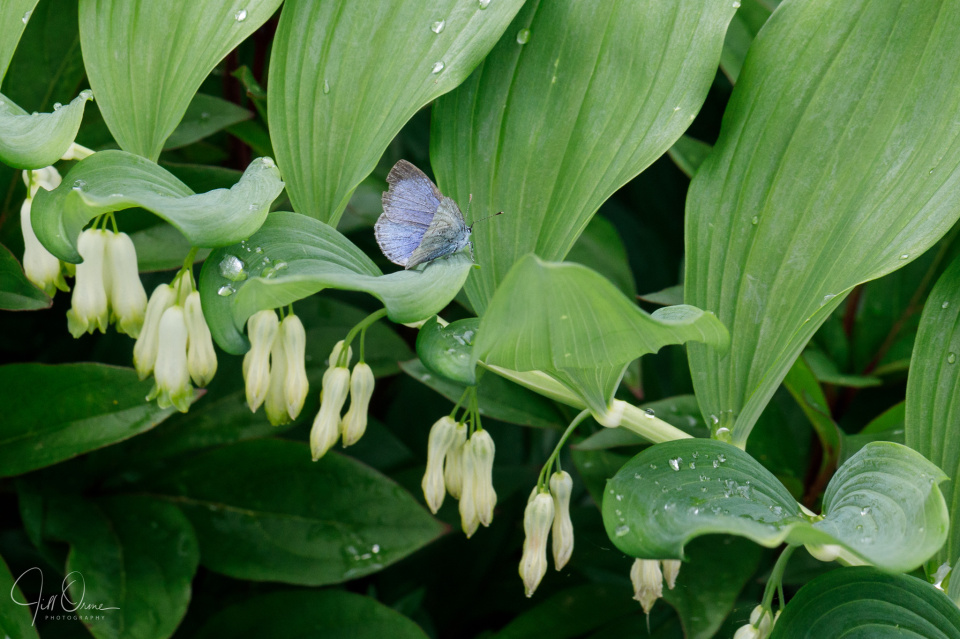 I’ve surprised myself by selecting this image tonight, when I have photos of a Large Red Damselfly, a spider predating a shieldbug, and a few other quite respectable invert close-ups. But there’s something about it that really appeals to me – I think primarily the shapes formed by the Solomon’s seal, which give me the feeling that the Holly Blue is riding a series of waves – or possibly descending a rather extravagant staircase. I also like the context that the plant gives to this tiny butterfly, and the water droplets remind me that this was a day when we had lots of weather, which appropriately came through in a succession of waves.

A few seconds earlier I’d photographed this rather battered female ovipositing on a Cotoneaster salicifolius, and thereby supporting the assertion that Mike Williams of West Midlands Butterfly Conservation made to me recently that the Holly Blue has possibly the widest range of larval foodplants of any UK butterfly species. She wasn’t delighted that I was following her around with a macro lens, but doggedly carried on working anyway, so once I’d recorded her laying a batch of eggs and then taking this brief rest stop, I went away and left her in peace.

For the record: we had one successful and one failed emergence of Large Red Damselflies from the wildlife pond this morning. The winner got away safely into the trees, but the other unfortunate somehow ended up on the surface of the water, being eaten alive from underneath. I quickly drowned him to put him out of his suffering, while not depriving the predators of their meal.