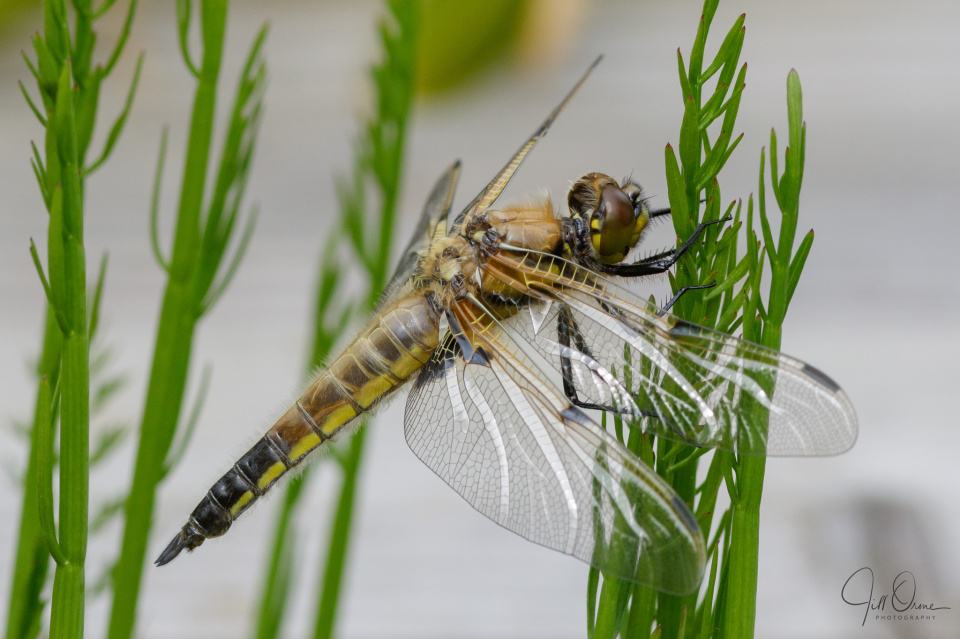 We’ve lived in this house for over twenty years now, during which time I’ve walked most of the field pathways around the village, with and without dogs, and observed the local wildlife going about its business. During the last few years, from spring through to autumn, I’ve gone out specifically searching for invertebrates of various kinds, and ever since I first began photographing them I’ve had a particular fascination, almost amounting to an obsession, with dragonflies. But never in all that time have I seen a Four-spotted Chaser anywhere around the village, until this morning, when this female emerged from our little free-standing patio pond.

I’d been intending to take another road trip today, but after staying up late into the the night, attempting to scale my processing mountain, I was tired, and I struggled to get myself moving this morning. Eventually, still pondering a trip out (Ripple? Eckington? Croome?) I wandered off down the garden to see what was around and record anything interesting. In passing, I automatically checked the pond for damselfly emergences, joined by R who was on his way to mow the lawn in the top garden. Neither of us spotted anything.

About half an hour later I finally decided on a trip to the Avon at Eckington, and walked back to the house to get all my gear together, glancing at the patio pond as I passed, and nearly dropping the camera I was carrying when I saw the dragon clinging to the top of a water dropwort frond. My first thought was Where did that come from??, followed a nanosecond later by the realisation that with its wings still folded in emergence position there was only one place it could have come from, and that was this pond. A few seconds later, summoned from the mowing by my frantic jigging around and arm waving, R came and inspected the scene and spotted the exuvia down near the bottom of the stem.

I was torn between kicking myself for missing the actual emergence, and patting myself on the back for still being on the premises, so I could rethink my morning, fetch a patio chair, and sit next to the pond, watching over the Chaser as she completed the process of drying out and hardening. It’s tantalising not to know how long it took her to walk up the stem and burst from her larval case, but I can at least tell you that it was twenty minutes from the moment when she snapped her folded wings open, to them being hard enough for her to take her maiden flight. R had finished mowing by then, and we were both watching as she suddenly lifted off, flew a couple of little circuits above our heads, and then picked up speed and disappeared from view.

Four-spotted Chasers have a two-year life cycle, which means that at some point in the summer of 2020 when we first installed it, a mated female spotted this little pond, overflew it, and either flicked her abdomen or dipped the tip in the water, releasing a batch of eggs. Her male partner was probably hovering nearby at the time, to prevent her from being seized by a rival male before she could deposit the eggs he’d fertilised. Sadly, R and I missed this dramatic event (unsurprisingly really, as it lasts mere seconds), and thus we’ve been unaware that our ‘damselfly pond’ has been hosting at least one (surely many more than one?!) much larger and more dangerously predatory larva than the Large Red, Azure, and and Blue-tailed Damselfly larvae we’ve become used to seeing emerging from it. From now on I’ll be mentally congratulating each one of those that makes it safely to the surface.

I’ve put a little group of photos on my Facebook page, if you’d like to see them. The exuvia measures about 25mm from head to tail, which is almost exactly half the length of the adult dragonfly.