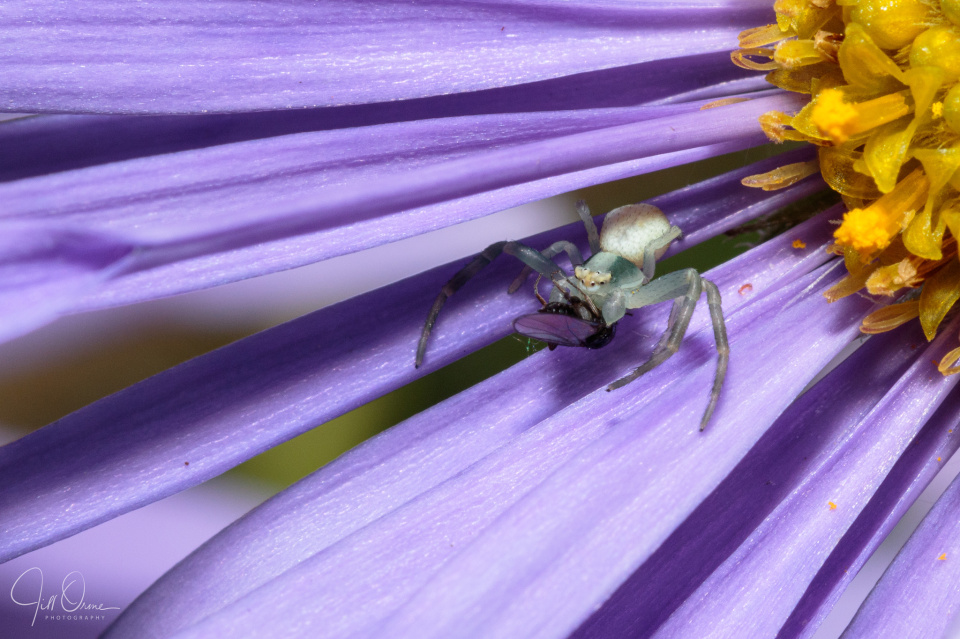 I’m not much of a one for using flash, or a tripod, while photographing wildlife: natural light and hand-held is how we roll here, generally. But several dozen frames into trying to get a sharp shot of this minute crab spider, in a shady corner of the garden, with a ferocious gale hurling everything around, I realised that desperate measures were called for. And putting in more than the usual minimal effort definitely paid off, because apart from the shadows (which are no worse than you’d get on a sunny day) I’m pretty happy with this photo. I’d love you to look at it full-screen, if you have the time – unless you’re an arachnophobe, of course. But if you are, you probably left the room already.

I can’t identify what’s left of the fly, but the spider is a male Misumena vatia, sometimes called the flower crab spider because rather than spinning a web it lurks on flowers, and pounces on insects when they land to feed. Given that this is the same patch of asters, I think he’s probably the same spider as I photographed on the last day of the AOG – in which case I owe him an apology for having misgendered him in that post. Males of this species are very much smaller and less obvious than females, and given how dark it was in this flower bed at lunch time today I was lucky to have spotted him at all. After I’d taken all my gear back to the house I went back out with a ruler to try to measure him, but got no further than deciding that he was somewhere between two and three millimetres from front to back. At this point he decided that enough was enough, and whisked his lunch away to the underside of the flower – and to be honest, I couldn’t really blame him.