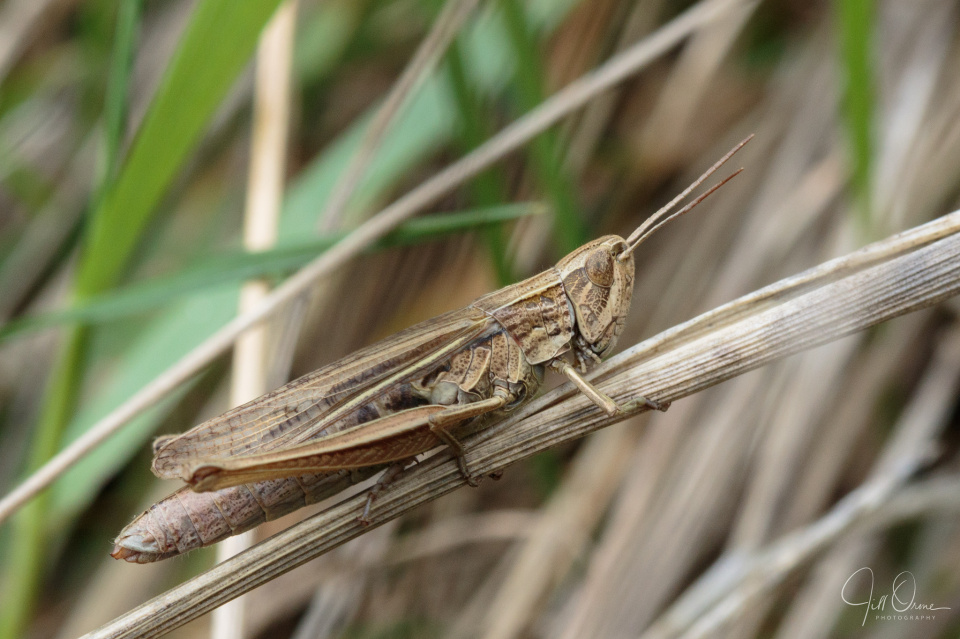 I was heading homewards from the post box, with another rain storm threatening, when I decided to risk taking a quick walk around Tilly’s field in search of insects. In contrast with yesterday there were dozens of grasshoppers pinging around, and I managed respectable photos of several of them. This female Chorthippus albomarginatus is my favourite of the day because of her nice mottled markings – she’s so well camouflaged against the dry grass stalks that if she’d stayed still I’d almost certainly have missed her.

The Lesser Marsh Grasshopper is currently increasing in number, and widening its range. It used to be found on grassland adjacent to water – for instance river banks, salt marshes and sand dunes – and was more or less confined to the south east of England; but now it’s frequently found in dryer habitat, and has spread through the Midlands, into Wales, and northwards as far as the North Yorkshire coast.

If as a species it still has a penchant for damper areas, the specimens in Tilly’s field will have enjoyed themselves today: just after I got home there was a heavy downpour, followed by half an hour of warm sunshine, and then a second, lengthy, deluge. In theory this is a hay meadow, but with even worse weather forecast for tomorrow and later in the week, it may well end up becoming a Lesser Marsh.