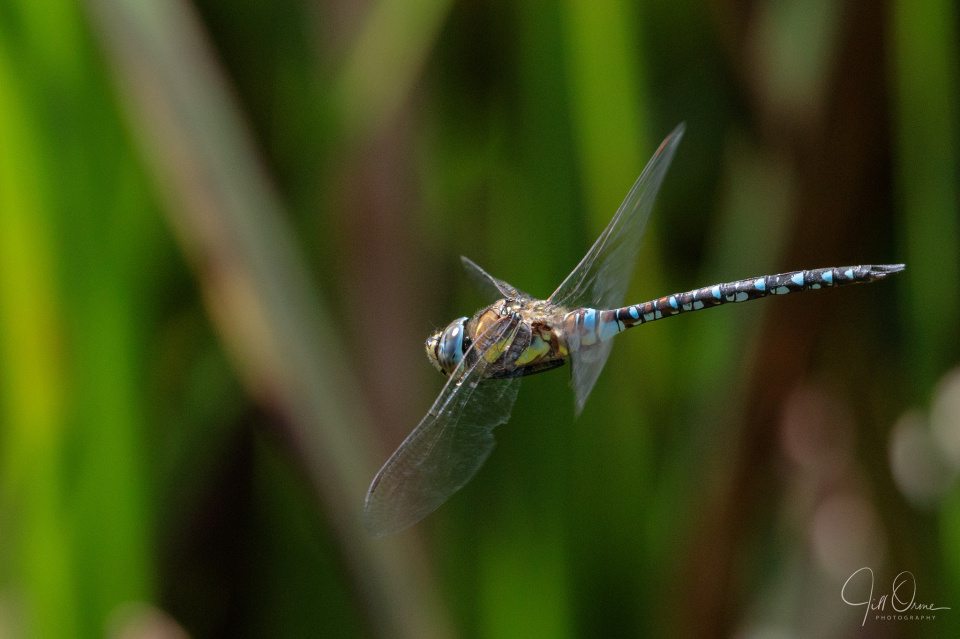 I went for a solo dragon walk at Croome this morning. The insane winds of the last few days had dropped and the temperature was pleasant for walking, and although I missed having R to chat to, the advantage of being alone was that I could spend as much time I wanted taking photographs – so on balance I had a pretty good time.

Most of the usual suspects were out and about, though I was surprised not to spot any Southern Hawkers. In compensation, the reed bed between the white bridges at the lake was thick with male Migrant Hawkers, hunting, patrolling, and getting on each other’s nerves quite a bit. The light on that reed bed can be tricky from the north side; I prefer to go off the island and through the shrubbery to the south side so that the sun’s behind me, but at the moment they have barriers up to stop you doing that, so I just had to do the best I could from the island. Also, because the Covid situation has disrupted my Odonata season, I’m sadly out of practice at photographing dragons in flight, so I took a lot of photos to achieve not very many keepers. But having lined up all of my excuses, I’ll admit that I’m not completely unhappy with this: yes, it would have been better if the light had been kinder, and no, it’s not sharp from frons to claspers, but in the circumstances it’s not too bad.

The name of this dragon might seem strange these days. Until the Second World War it was a rare migrant from Europe into Southern England, but it’s now common and resident throughout much of lowland Britain and Ireland. Its spread is only limited by the fact that its larvae can’t withstand low temperatures, and in recent years climate change has also allowed it to push north into Scotland. Its common name is unlikely to be changed though, because it’s still noted for being a migratory species: each year the home-bred population is boosted by late summer influxes from the Continent. It’s interesting (though simultaneously worrying, of course) to see that the Southern Migrant Hawker seems to be moving northwards in the same way; it has already established a breeding base in Essex, and this season it’s also been seen in both Hertfordshire and Cambridgeshire.

In Ireland the Migrant Hawker is called the Autumn Hawker, and in my personal Odonata Planner it occupies a notable and rather sad position: it’s the last dragon to emerge each summer, and even though it has a relatively long flight period, its arrival is a warning that the dragon season is moving towards its close.