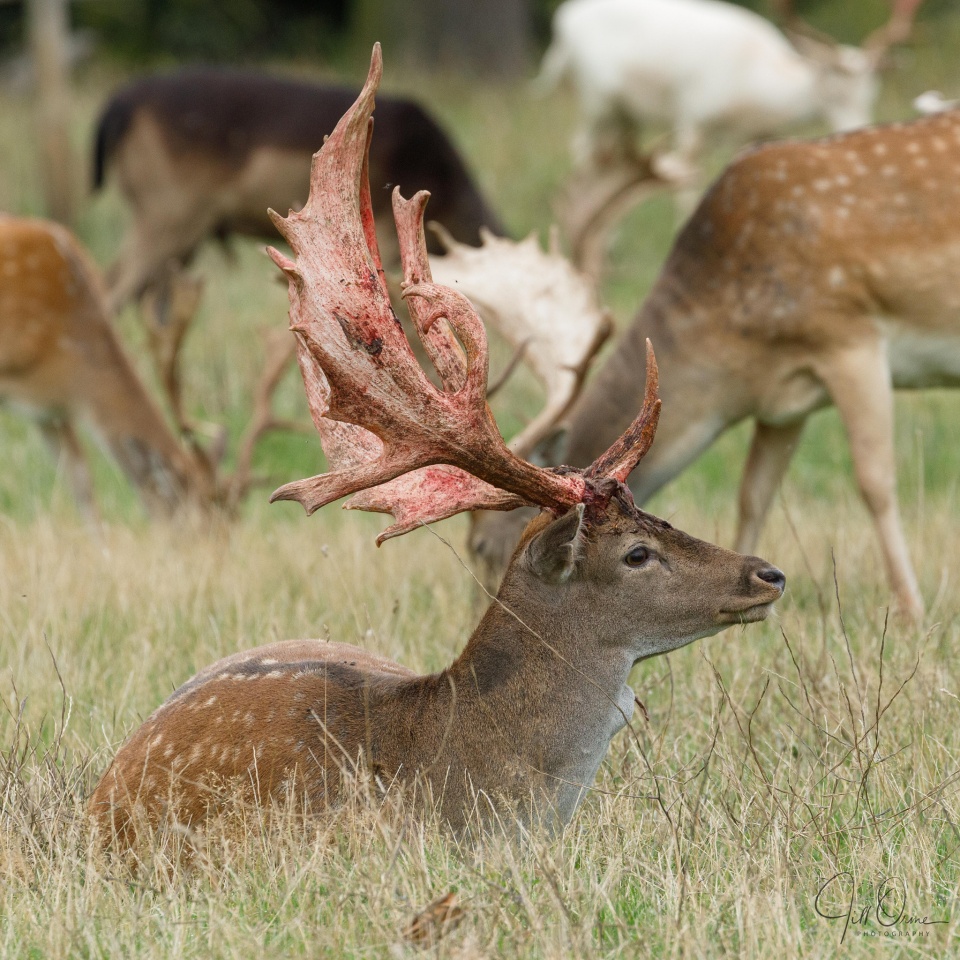 The walk that R and I chose at Charlecote this morning took us close to the fallow bucks, and gave us an excellent view of the different stages of growth of their headgear. All the younger ones have clean antlers by now, but the big guys have only just finished growing theirs and are still shedding the velvet – a gruesomely fascinating process that I’d previously only seen in photos. If you’re not already reaching for the off switch, there’s a frontal view of the same buck below, which shows him wearing swathes of torn velvet over his left eye like a goth hairdo. 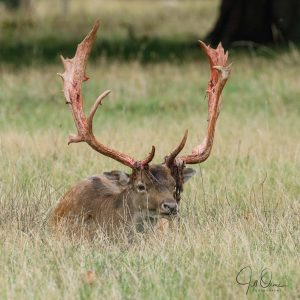 The whole business of growing and shedding antlers annually is bizarre when you stop to think about it. In fallow deer it begins when the days begin to lengthen in spring, and a buck’s testosterone level starts to rise. This triggers growth at two bony outgrowths on his skull, called pedicles, as well as causing him to develop extra muscle around the neck and shoulders. To begin with the new antlers are soft and cartilaginous, and they’re covered by connective tissue and skin that are dense with blood vessels to supply them with nutrients, and with nerves that make them very sensitive. The growth rate of velvet antlers is around 2cm per day – which seems ridiculous until you look at the size of this set, and realise that their owner has grown them over the course of just four months. As they develop, the cartilage is gradually replaced by bone, and when growth is complete and the antlers are fully calcified, the skin and connective tissue die, shrivel, and peel away.

After the breeding season the buck’s testosterone level begins to drop, and he starts to reabsorb calcium from his antlers. A number of factors, including age, general health, and nourishment, will influence the the length of time he keeps them, but at some point in the late winter or early spring the junction between the antlers and pedicles will become so weakened that the antlers will naturally break from the skull. Deer will eat cast antlers to recover the minerals they contain – an eminently sensible piece of behaviour for the buck, who almost immediately he’s shed his old ones begins the process of growing a new set.

All of this faffing around with antlers involves a huge commitment of energy and nourishment for the buck, but the pay-off is that his antler rack increases in size each year until he passes his prime, and this improves his position in the herd and increases his chance of mating and passing on his DNA. A heavy buck with large antlers will be dominant among the male herd, and able to attract a harem of does during the rutting season. If he has to fight for his females, the size of his antler rack gives him a reach advantage over a smaller male, and the muscle development that lets him carry those antlers gives him a weight advantage too.

In this herd, which is managed, the biggest bucks rarely seem to do much fighting because there are enough does for them all, and they can dominate the younger ones by threatening them, and chasing them away if they get too close to the females. The younger males tend to treat these big guys with the respect they deserve, while being more than ready to launch a guerilla charm offensive against the does, if they can catch them unattended, and they mainly fight within their own age and size groups. The rut is still several weeks away, but a little pre-season sparring was going on at Charlecote this morning; I’ve posted a few photos here, if you’d care to see them.