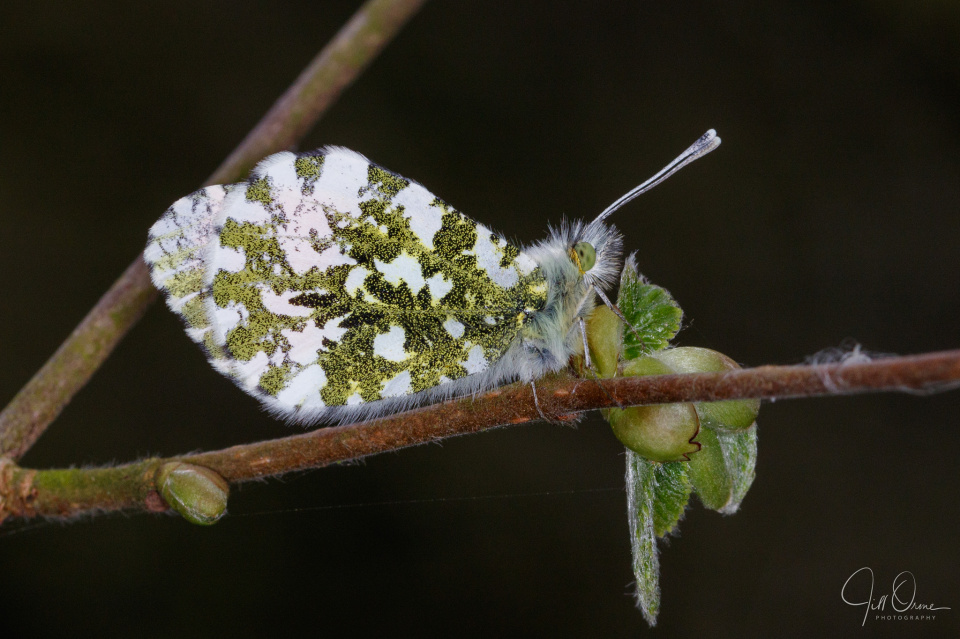 I slept in this morning, and didn’t remember the Orange Tip until 9am, by which time I assumed that he’d long since have left his roost. And it was trying to snow, so I didn’t much fancy a walk down to the wild garden to check.

An hour later though, by which time the snow had given up and gone home, R came and told me that the butterfly was in fact still perching on the same hazel twig, though at some point he’d turned round to face the opposite direction. “I think you’ll need your ring flash though,” said my consultant. “It’s pretty dark.”

I doubted this, but I haven’t got where I am today by being proved wrong and having to walk twice as far in the freezing cold as I need have done had I listened in the first place, so I donned thermals, broke out the ring flash, and went off to find my little friend. And R was quite right: it was too dark, and too windy, for flash-free macro. Because of the position the butterfly had moved into, I had to thread myself through the tree and shoot this from the other side, which is why at first glance he looks to be facing the same way as he was yesterday.

The sun finally emerged at around lunch time, but it didn’t reach the poor Orange Tip until quite late in the afternoon, and even then the air temperature was bitter. By this time I’d made several trips down the garden to check on him, and though I was pretty sure, from a change in the way he was gripping the hazel leaf, that he was still alive, I’d begun to fear that the situation would not end well.

In the end I decided that I was becoming too invested in his fate, and as there was no sensible way I could influence it, I forced myself to detach from the situation, and stop visiting the tree to see if he’d managed to fly away. I hope that he did though, because the temperature overnight is forecast to drop below freezing, and tomorrow won’t be any warmer than today. As this is one of the earliest-emerging of our butterflies, and is found throughout the British Isles, I assume that it has reasonable tolerance of cold, but after twenty four hours clinging to that twig, I’m certain he would have benefited from feeding and then finding a more sheltered roost.