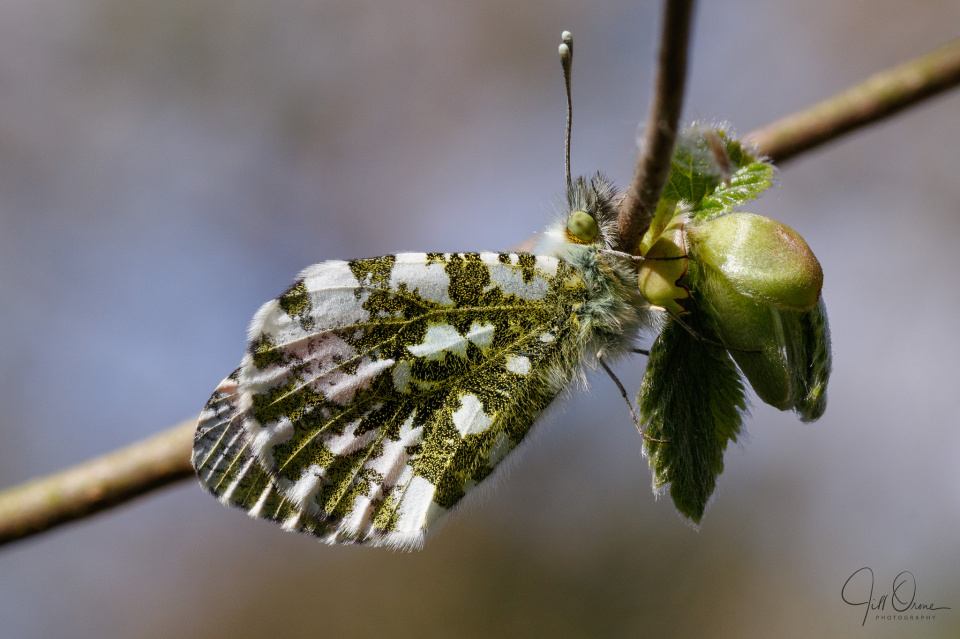 Not only did it freeze overnight: I got up to a dusting of snow, as well. There was surely no way, I decided, that the Orange Tip could have survived the night. But after R went down to the wild garden after breakfast, to fetch the SD card from the fox-cam, he reported that the little chap was still hanging on to the same hazel leaf bud, and was now bathed in morning sunshine. So of course, I went to take a look.

By this time I feel that we’re almost family, so I chatted away to him as I was taking photos from various angles…. and he, of course, completely ignored me. I did see him spread and then close his antennae though, which told me that he was still alive, and encouraged me to think that at some point during the day he would fly away.

He didn’t fly away.

During multiple visits over the course of the day, I’ve offered him a warm finger to move onto, but to no avail. I’ve also hatched – but then rejected – a plan to cut this twig from the hazel, and “re-plant” it at the base of a spring clematis at the foot of the south-facing yard wall, where he’d be camouflaged by the leaves, and protected from the fierce north wind we’re currently enduring. The decision not to intervene wasn’t based on the general principal of leaving Nature to take it’s course, which I happily break every time I put out food or water for the birds, or even plant something that I know will appeal to a particular species of insect, so much as a lack of confidence that my instincts about his welfare are more reliable than his own, and a disinclination to be responsible for a course of action that might turn out badly.

The last time I saw him (and I expect that it will turn out to be the last time) was at 6.30pm, when R and I went down to the wild garden in a minor blizzard to tell the tree surgeon where to dump a load of chipped bark he’d brought us. The twig was whipping around in the wind, but the Orange Tip was still clinging on.

In other news, last night’s fox-cam footage showed that the vixen we call Hoppy (because she’s carrying a healed leg injury that’s left her with quite a bad limp) arrears to be heavily pregnant. If we get any footage of cubs later in the spring I’ll post it to my Facebook page.

And finally, also on the subject of potential new life, R and I went for a very brisk, and very cold, walk around Charlecote at lunch time, and as we walked up through West Park I spotted this scene through a gap in the trees.