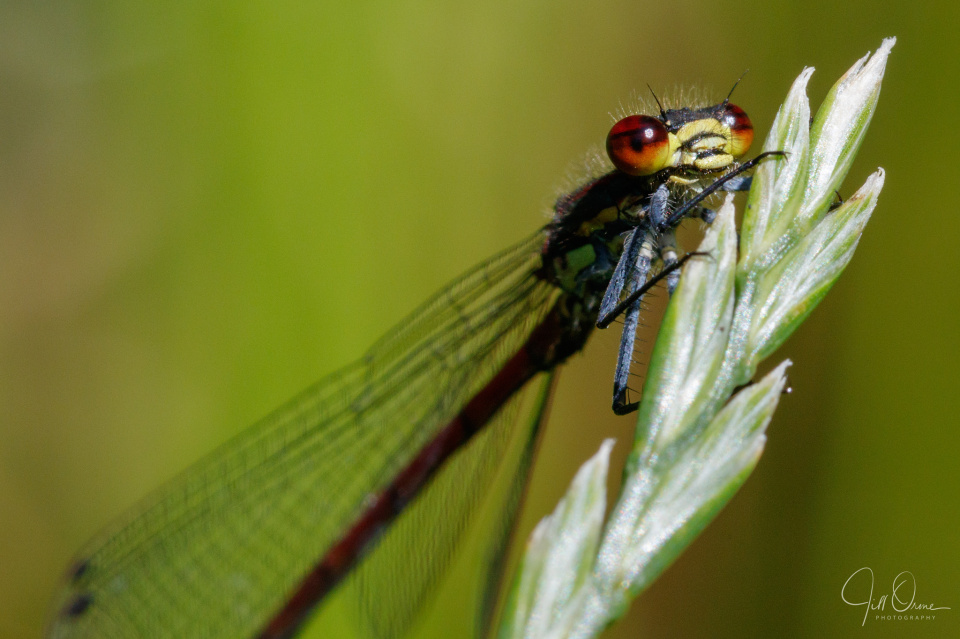 The mini-heatwave that the weather forecast has been promising us arrived today, reminding me that however grumpy I get when it’s too cold or wet for my insect subjects to be on the wing, many of them don’t appreciate it being too hot either – and neither do I. “Hot” in this context means 29° or so, which I daresay would have some of you reaching for your jumpers, but I spent much of the day sitting in the shade with a book, carefully averting my eyes from the sight of R doing useful things.

I did spend a while lying in the grass by the wildlife pond, steaming gently, and photographing a female Blue-tailed Damselfly ovipositing, but she was a tricky subject, being both small and nervous, and by the time I’d achieved a few reasonable images I was very distinctly overcooked. Bigger and less nervous, and seemingly determined to photobomb the shoot, were a couple of male Large Red Damselflies who were patrolling the pond in search of mates. This one in particular was very bold, and as well as swooping around over the Blue-tail and me he landed repeatedly on this grass stalk, which was only a few inches away from my nose. Eventually I turned the lens on him, and though he immediately took off in a panic, a few seconds later he came back round and landed again, and this time sat for a portrait.

The lighting here is a little over-dramatic, perhaps – certainly I’d expect a camera club judge to say so – and if I was thinking of it as a competition shot I’d need to do quite a bit of Photoshop fartnarklery on it. But this is what the day was like, and I can live with the highlights on the grass when the face is lit as effectively as this.