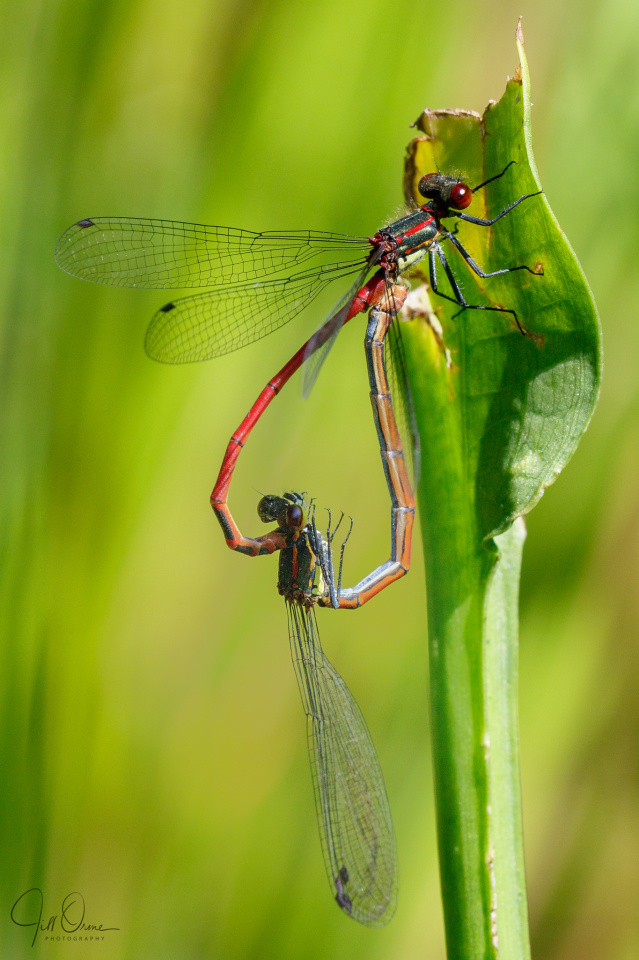 Things are hotting up in our garden. Having populated the village with a good number of Large Red Damselflies from both our ponds over the past month or so, it was highly likely that some of them would return at the end of their maturation periods with a view to mating and laying their eggs, and today the wildlife pond was busy with Large Reds throughout the day. Being a sentimental kind of person – where wildlife is concerned, at any rate – I felt a little sad for the “over-mature” guys, who weren’t strong or fast enough to mix it with the younger males in the competition for mating rights, and who ended up sitting on leaves or stalks of grass and just watching the frenzy. There’s absolutely no point dwelling on the mortality of insects though – that way lies madness – so instead let’s celebrate two of them successfully completing the circle of life. 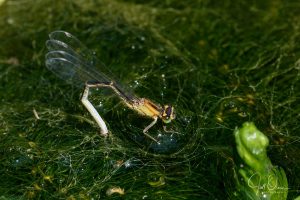 Also closing the circle is this female Blue-tailed Damselfly, one of two who were busily ovipositing around the pond weed this morning, at the same time as a tandem pair of Large Reds. Watching them all it was clear to me that solo oviposition is quicker and easier than tandem from a female’s point of view, in that she has free choice of which vegetation to use, and doesn’t have to wait for her mate to lift off when she has finished at a site, but can immediately move on to her next chosen place. A single Blue-tail female is also much harder to spot than a tandem pair of Large Reds, and is therefore probably safer from predation; I once saw the rather tragic sight of a female Azure Damselfly trying and failing to rid herself of the abdomen of a predated partner, which was still firmly locked to her pronotum by the claspers, and although she herself had avoided being eaten, it was obvious that her life chances with this unwanted appendage attached weren’t good. While the reproductive advantage to a male damselfly of tandem oviposition is obvious – he prevents another male supplanting his sperm until the eggs he’s fertilised have been laid – the only real advantage I can see to a female is that on occasion they sink very low in the water, and the added lift of a second pair of wings can help to get them out of trouble if their own are caught by surface tension.

One final point about the extra: this female is a rufescens-obsoleta, meaning (as I’m sure you’ll remember from our lesson on Tuesday) that she started out with a vivid pink thorax and a blue tail, but she’s now changing to her mature colouring. Today’s buttery colour is still quite bright and attractive, but over time the it will darken to a drab brown. The varied colours of Blue-tailed Damselflies, including several examples of the female rufescens and rufescens-obsoleta forms, are well illustrated on Jim Almond’s web site.