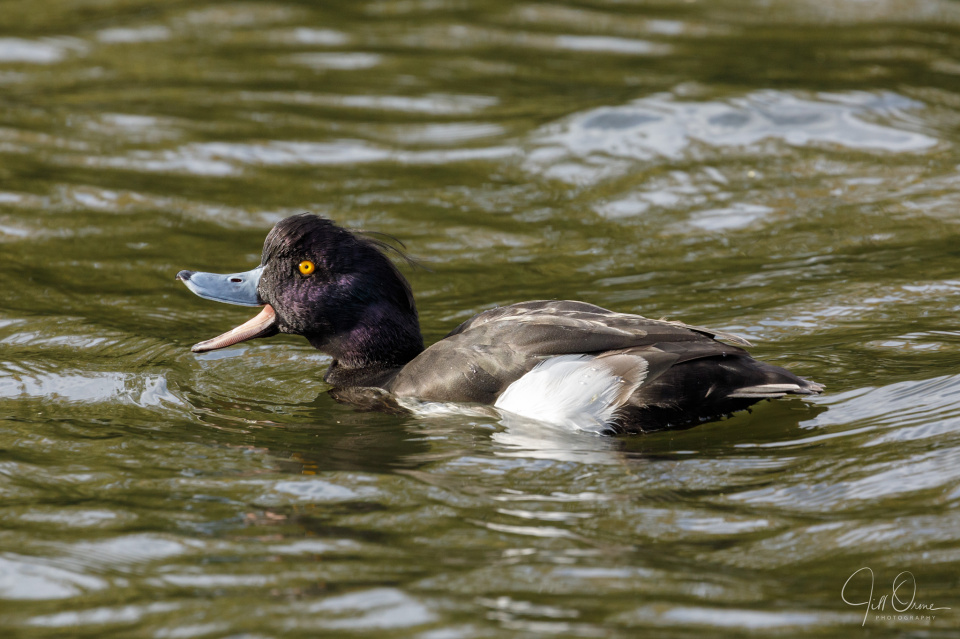 The young male tufted ducks that appeared on the Avon a few days ago are maturing fast: every time I see them their pale flank patches (which I always think of as bumpers) are getting whiter, and their crests are growing longer. This one, as you can see, is also developing the lovely iridescent purple cheek patches that help to make adult male tufted ducks so striking.

R and I watched a group of five tufties repeatedly diving for food this afternoon, and as always I was impressed by the length of time they can stay submerged. I’m keen to capture a series of shots of one dealing with a mollusc, because I’m still not quite sure how they do it, and I find myself wasting a large amount of time trying (usually vainly) to predict where they will surface, so that I can have the camera ready in case they come up with prey.

Today I was hampered not only by my poor prediction skills, but also by a heavy swell on the river due to the very strong and gusty wind – sadly, it transpires that the image stabilization of the 100-400 lens isn’t able to compensate when your subject is bobbing rapidly up and down. I did eventually get some shots of this chap with a catch, but the ones with a reasonable view of the snail in its shell weren’t sharp enough to keep. The best of the series shows him swallowing the last of it; I’ve posted it to Facebook, if you’re interested.

Despite the title of my post, he wasn’t quacking when I took this photo – in fact, I don’t believe I’ve ever heard a tufted duck call – but was either clearing his bill, or possibly regurgitating something nasty, after eating.