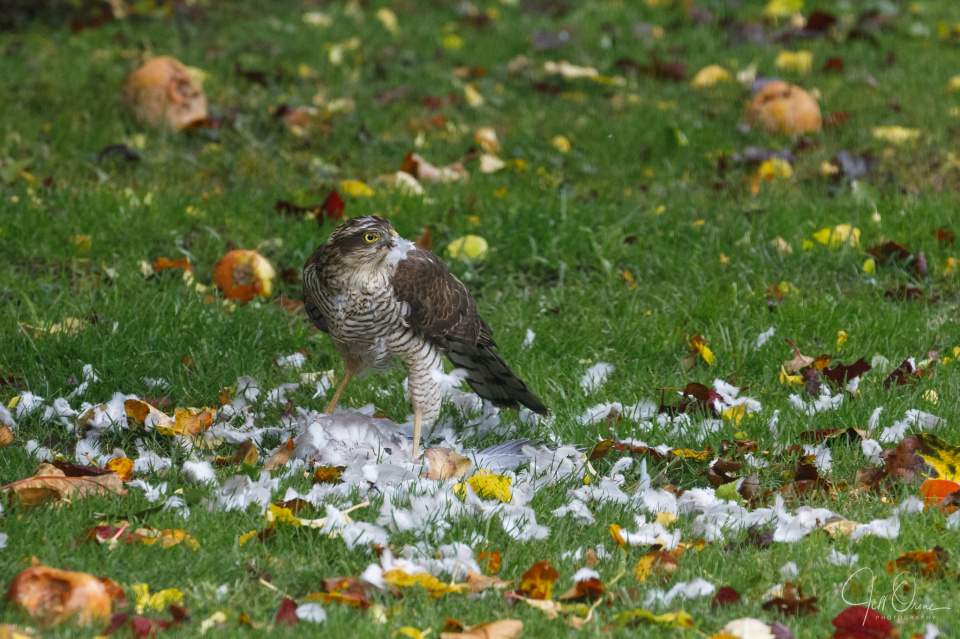 I’m indebted to R for today’s blip: I was in my study, grimly working through a mountain of files, when he called up the stairs, “Sparrowhawk in the garden, if you’re quick.” I wasn’t very quick, on account of the fact that I was still wearing my (floor-length) dressing gown, but luckily when I arrived she was still plucking her unfortunate victim.

For the past couple of months there has been a fresh pile of feathers somewhere in the garden every few days, so I think Mrs Sparrowhawk may be resident, but though R watched her dragging another woodpigeon down the drive a few weeks ago, this is the first time I’ve seen her properly. Given that we put out large amounts of bird food, thus encouraging the presence in the garden of what you might call live bait, I feel uncomfortably complicit in the death of this bird; but on the other hand the raptor has just as much right to life as the pigeon, and she isn’t a vegetarian.

My principal reasoning for describing this as a female is the fact that it was big enough to have taken a woodpigeon. Adult male sparrowhawks are about forty per cent smaller than females, and have greyer backs and more orange breasts; because of their size, they mainly take smaller birds. Juveniles of both sexes, up to a year old, have markings like these, which are similar to those of an adult female bird; but according to my books the adult female is greyer, so it’s possible that this is an immature female. All the time I was watching her she was looking around warily, and a couple of minutes after I’d arrived in the kitchen she picked up the substantial remains of the pigeon carcass and flew away with it – sadly it was a dark and dreary day, and I didn’t have the shutter speed to get a sharp photo of that quite impressive feat, but it reinforced my impression of a substantial and powerful bird.