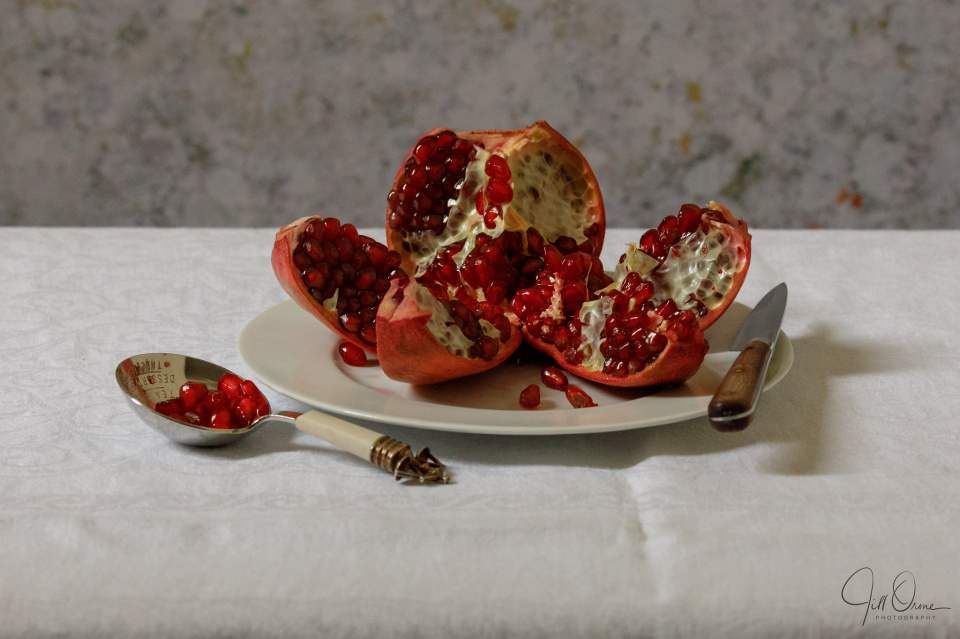 It’s not often that I have the opportunity – or the desire – to eat my subject, but I’m pleased to report that this pomegranate was delicious. R says that he’ll be happy to eat another one just as soon as someone breeds a seedless variety. “Fibre,” I said, but he didn’t look convinced.

Forty minutes of fartnarkling around with a still life set-up was just about the most interesting thing that happened today, in the midst of much boring domesticity and file processing, on a day that was too wet for outdoor play. What I’m going to photograph tomorrow, given that it’s scheduled to rain for twenty three hours and I’ve now eaten the most photogenic thing in the house, I can’t quite imagine.

In Greek myth, Persephone was kidnapped by Hades and taken off to live in the underworld as his wife. Her mother Demeter, goddess of the harvest, went into mourning for her lost daughter, and all green things ceased to grow. Zeus could not allow the Earth to die, so he commanded Hades to return Persephone, but this being Greek mythology, it was some kind of law that anyone who consumed food or drink in the underworld was doomed to spend eternity there. Hades had offered Persephone a pomegranate and she had unwisely eaten six seeds, so from then on she had to spend six months of every year in the underworld. During these six months, while Persephone sits on the throne of the underworld beside her husband Hades, her mother Demeter mourns, and no longer gives fertility to the earth.

In 1874 D. G. Rossetti painted his lover Jane Morris with a pomegranate, as the pining goddess Proserpine from the Roman re-telling of this story; given her unhappy marriage to William Morris, the image seems to contain more than the usual quantity of Pre-Raphaelite symbolism.