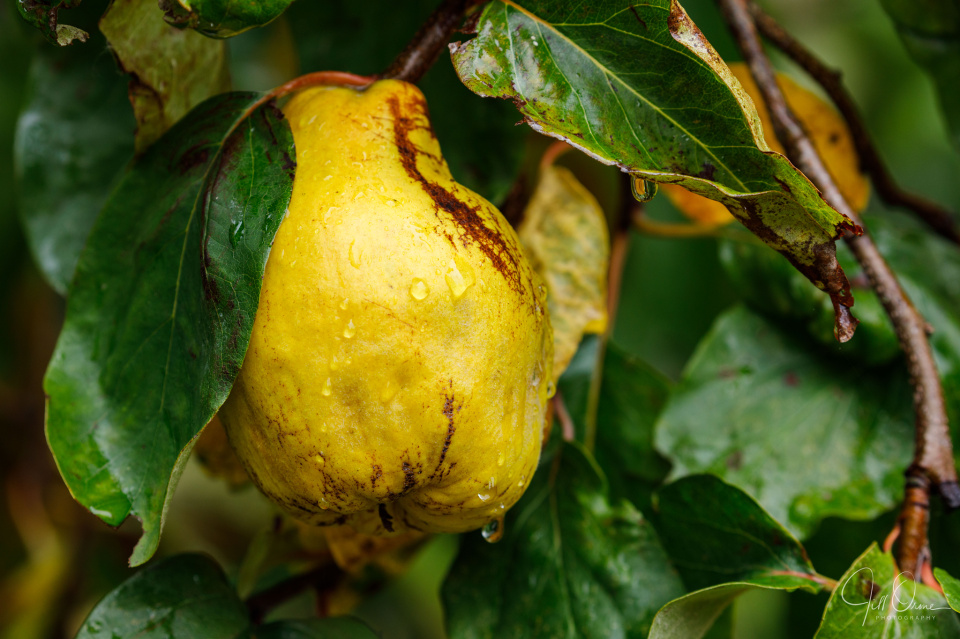 Absolutely nothing of interest happened today, so I won’t test your patience by wittering on. Instead, I’ll give you two of my favourite recipes for dealing with a glut of quinces (with apologies if you’ve been with me long enough to have seen them before). If you don’t have a quince tree of your own, it’s worth checking your local farm shop, because it’s been a great year for what can be quite a temperamental fruit.

Are you sitting comfortably? Then I’ll begin.

Scrub the quince skins clean but do not peel or core – simply cut into large chunks and place in a large heavy-based pan with the water and the lemon rind and juice. BTB, then reduce the heat to low, cover and simmer for about 45 minutes until the quinces are very soft. Stir a few times to prevent the pulp settling and sticking on the base of the pan.

Place a jug under a jelly strainer or a muslin-lined sieve, and pour in the contents of the pan. Leave to strain for about an hour until the pulp is relatively dry, but do not squeeze it. Set the liquor on one side for use later.

Put the quince pulp through a food mill or the milling attachment of a food processor (or at a pinch you could rub it through a sieve, though that would be pretty hard work). When you’ve separated out the flesh pulp, weigh it and place in a clean pan with an equal weight of sugar (I had about 860g from 1kg of quinces).

Put the pan on a medium flame and stir constantly till the sugar dissolves. Bring to a very low simmer and cook until the mixture thickens. NB use EXTREME CARE at this point!! If the mixture bubbles and gloops you are likely to get a 2nd degree burn – it’s the culinary equivalent of napalm. It’s better to cook it more slowly– it’ll still thicken but it won’t catch, and you won’t be searching the house for burn salve. Mine took about half an hour, on a heat diffuser and stirred almost constantly, to get to a deep orange colour and thick enough for the wooden spoon to stand up in.

Line a 7”x7” cake tin with baking parchment, pour in the paste and smooth the surface. Put in a 50C oven until set – what you’re aiming for is a glistening orange jelly that’s firm enough to be cut into chunks or slices but not chewy. I baked mine for an hour, then turned off the oven and let it go cold with the paste still in there. When I took the paste out of the cake tin I thought the underside was still too soft, so I upended it on a baking tray and gave it another hour at 50C.

When the paste is cold, wrap in baking parchment and foil and keep in the fridge – it should last up to a year if you’ve got it dry enough. It’s essentially a fruit cheese, so you can use it just like jam – but it’s best eaten with a good strong cheese such as Manchego or mature cheddar.

When you’re through with worrying about the paste, take your reserved poaching liquor and measure it. Place in a saucepan with 225g of sugar per 300ml (I had 350ml).

Heat slowly till the sugar dissolves, then boil to setting point. Because you cooked the quinces with their skins and cores the pectin content is pretty high and it won’t take long – mine took about 10 minutes. You should really skim the surface at this point but I didn’t bother. Pour quickly into a warmed sterilized jar – once it reaches setting point it will solidify much more quickly than jam.

Don’t submit it to a W.I. competition because it won’t be crystal clear, but present to loved one with toast, and wait to be told it’s the most delicious thing they ever tasted.

Your work here is done.

(If I feel the need to photograph another quince before the end of the season, you may get my other favourite recipe, which is quince vodka.)