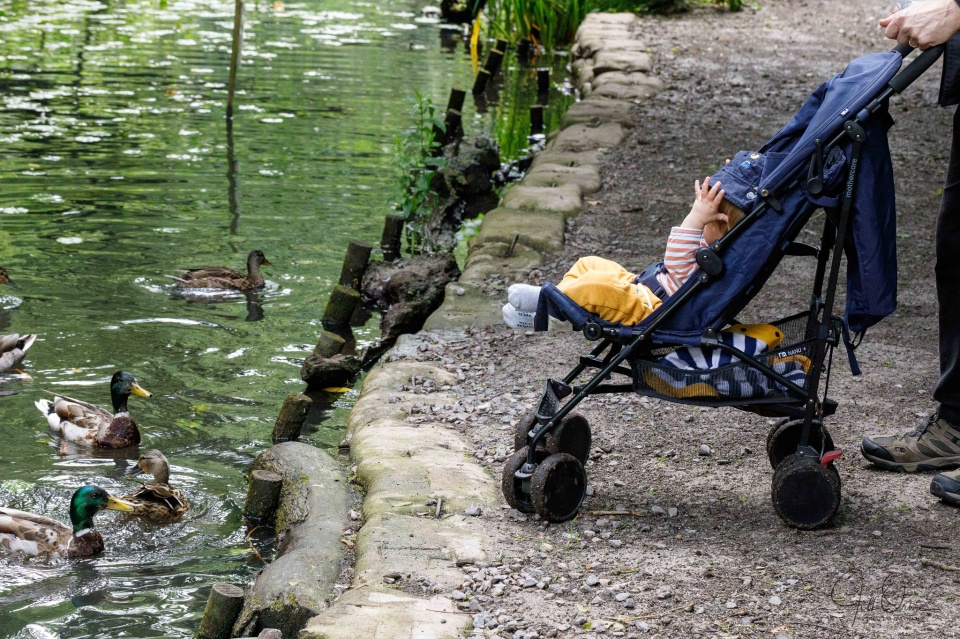 Day four back from holiday. Still desperate for a lie-in, but Baby B’s ten hours of peaceful, unbroken sleep lasted from 7.30pm yesterday to – well, you do the maths. Perhaps I should have done it too, in advance, instead of sitting around reading late into the evening.

In another lifetime I was no stranger to 5.30am, either because I had a lot of work on that needed an early start, or sometimes (more fun times) because I hadn’t quite made it to bed yet. I miss London, and my misspent youth. These days, burning the candle at both ends is more likely to mean being up beyond midnight and then again before 8am, and generally results in me falling inexorably asleep at some point in the afternoon, with my forehead resting on my keyboard.

Today though, R and I found ourselves bouncing around like a pair of Duracell bunnies at the crack of You Cannot Be Serious: breakfast, playing, getting dressed, more playing, second breakfast, reading, more playing, a trip round the garden to look for bees, more playing… OMG!! HOW CAN IT STILL ONLY BE HALF PAST EIGHT??? …a children’s animation on Netflix, more playing…. and finally it was time for a walk to the park and a pram nap. Disappointingly, it turned out that it was B who was going to get the pram nap, rather than me, but R saved the day by going to the bakery and bringing back coffee and cookies, on which I fell as though I hadn’t seen a calorie in a month.

Once the Boy woke, duly refreshed, we loaded him into the car and took him off to Forest Farm to feed the ducks. Here you see him correcting a minor wardrobe malfunction, which occurred because the small buggy we were using, though convenient for transporting in the car, rather restricts his throwing arm – an awkwardness that had led to him knocking off his hat. I’d half expected the hat to follow the bread into the canal, but I underestimated him: he’s an organised little chap, and knows that when it’s sunny, hats live on heads.

By the time we got back to the house L and G were home, as desperate to reunite with their baby as he was delighted to see them. So we handed him over with joy unconfined on all sides, and after a quick takeaway lunch got ourselves (more or less) together and set off back to the Shire. It was a delightful weekend, and if I’m spared that long I’ll probably be ready to do it all again in about a decade. Or maybe two.