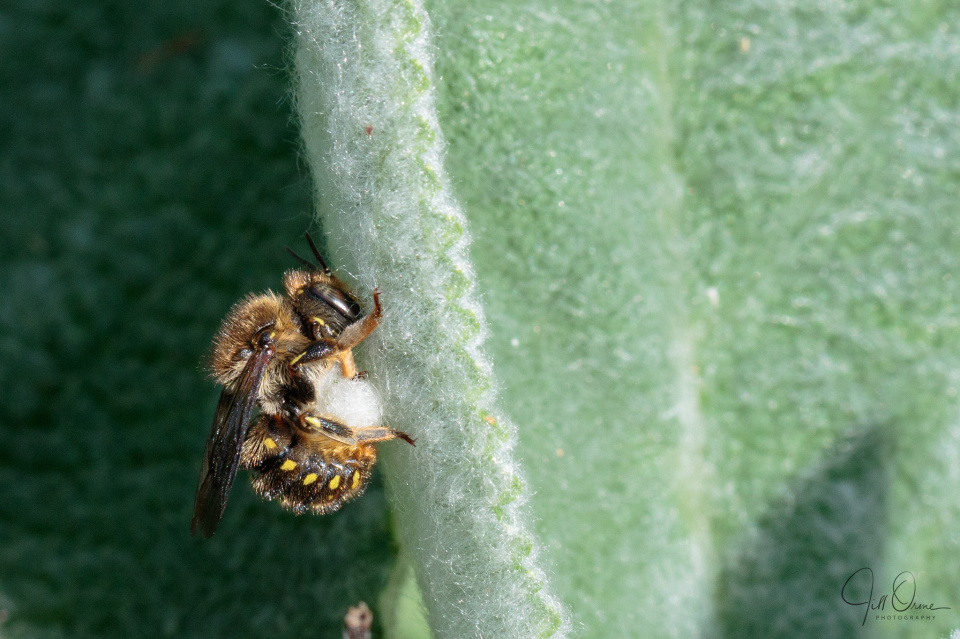 The heat and humidity of the past two days have more or less done me in, bringing on a rheumatic flare, so rather than the trip out I’d been planning, I spent most of the day sitting in a deckchair in the shade by the wildlife pond, reading and daydreaming. I think it did me good, but I still have to work a little at remembering to count my blessings, and not become frustrated by the inactivity.

Every now and then I took a little walk to see who might be doing what where, and among other discoveries I had two nice encounters with female wool carder bees – or possibly the same one, because the differing angles didn’t allow me to compare the markings. This morning I was treated to an excellent view of the wool carder’s fearsome-looking mandibles; and this afternoon I witnessed the use to which she puts those jaws.

I tend to forget until too late that I have the technology to make videos, which is a shame in this instance, because I was fascinated by the way she worked up and down the underside of the stachys leaf, and I wish that I could show you how quickly and neatly she went about this completely instinctive activity. As she clipped the down with her mandibles she used her forelegs to roll it into a ball beneath her body, and when she’d collected as much as she could comfortably carry she flew away with it. She will have used it to create individual nest cells inside a cavity such as a hole in a wall, in each of which she will place pollen and nectar, and lay a single egg. When she has filled the cavity with nest cells she will seal the entrance with leaf mastic and/or mud and grit, to protect her developing offspring.

In a further illustration of how amazing nature can be, R and I were sitting in the wild garden this evening, enjoying a pre-dinner glass of chilled rosé, when a Southern Hawker appeared and began to fly hunting circuits around us. This beautiful insect, which until a few days ago was an aquatic larva, showed such absolute mastery of the air that we laughed with delight at his flying prowess. On a couple of occasions he circled so close to us that R felt it only polite to offer him a glass of wine of his own, but he declined and went off to carry on his hunt elsewhere.