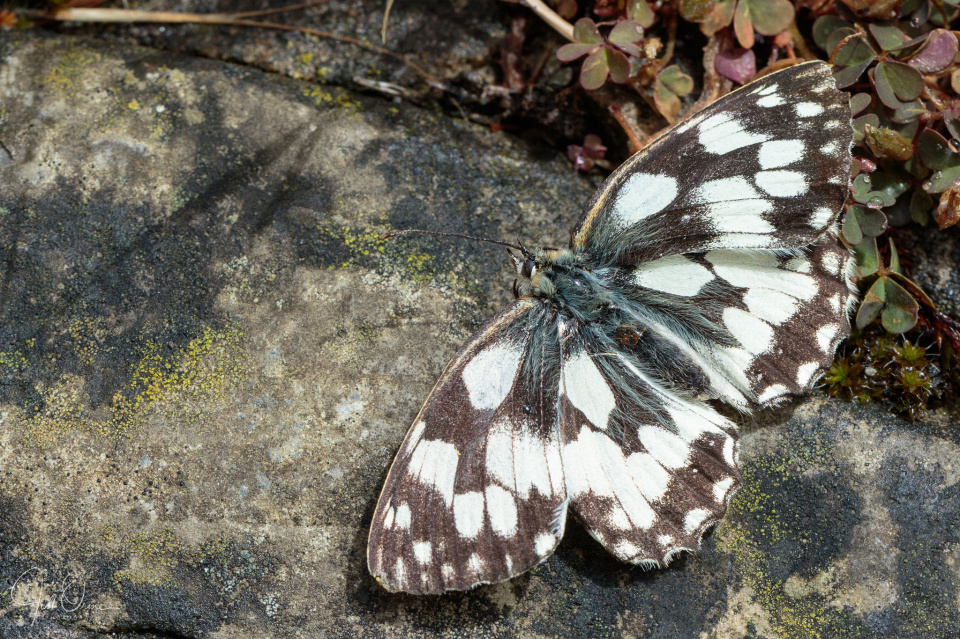 R rescued this male Marbled White from the conservatory this morning, and brought him upstairs in a glass covered with a piece of card, to ask me what to do with him. I said that he’d probably be fine if we simply put him down on the flags outside the front door – but I was surprised that he was still there when I got back from locating a camera, and began to be a little concerned that he’d been in a hot room for too long and might not recover.

When I took this photo he was unnaturally still, and his proboscis was coiled up, but by the time I’d worked round to his head end he’d extended his tongue and was taking moisture and salts from the damp surface of the flags. We were just thinking that it might be a good idea to recapture him and place him on a flower, when he demonstrated that he’d refreshed himself quite adequately, thanks all the same, by taking off and zooming away over the tall hedge that divides us from the nearest field. So all’s well that ends well.

In other news, that nice Mr Averill, the Worcestershire Odonata supremo, has now confirmed that the exuvia I collected in Trench Wood on Tuesday previously belonged to a Southern Hawker. He has asked me to log it on iRecord, because exuviae are the best possible evidence of breeding sites – which I hadn’t previously considered, but which makes absolute sense as soon as someone points it out to you.