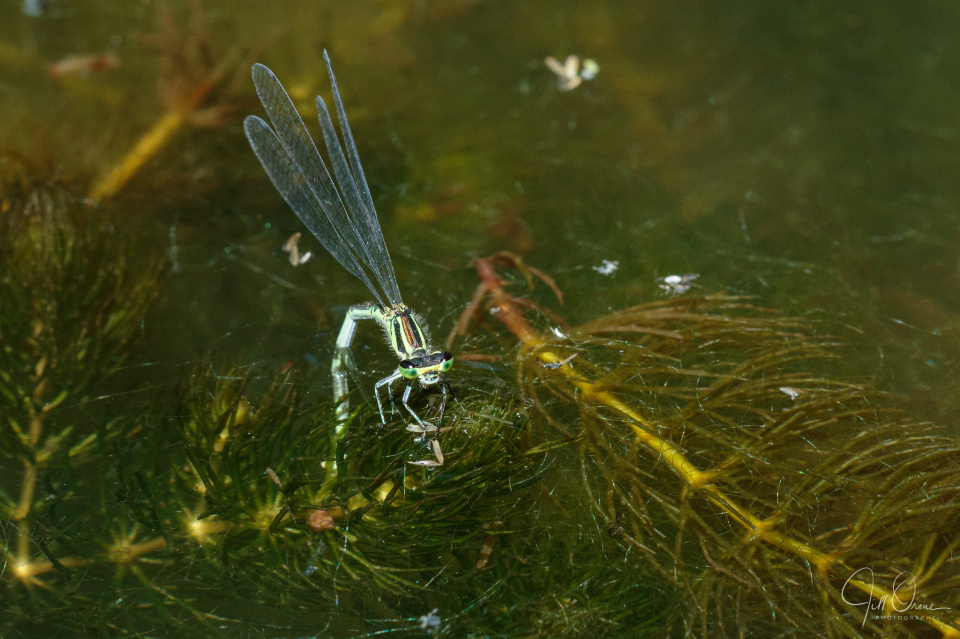 Until I became a pond custodian, I had no idea how many female damselflies oviposit alone. When I took this photo there were two solo female Azures working around the pond plants, as well as the tandem pair in my extra – and having watched all four carefully, I’m confident in saying that the loners have a much easier time.

On her own, a female works quickly and efficiently around the pond, checking various pieces of vegetation to see if they’re suitable for the injection of her eggs. In tandem, she has to wait until the male decides to move them both, and if – as often happens – he selects a plant that she doesn’t like, all she can do is wait until he decides to move again. When he does put her down on a good plant she has to anchor herself to it with her claws, to prevent him from lifting her before she’s finished with the site; in my extra you can see that the male’s wings are working as he tries to take off, but the female is clinging on and refusing to be moved. 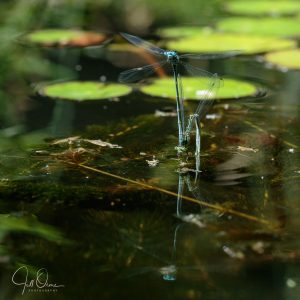 Of course, the male has his own reason for being involved in oviposition, which is to prevent another male from seizing and mating the female, and supplanting his sperm before she has laid this batch of eggs. But I can’t help but feel that it must be a relief to a female when her partner gets hungry, or spots another potential mate, and releases his grip on her, allowing her to get on with placing her eggs in peace. As my family used to say, “If you can’t help, do at least try not to be a hindrance.”

For the record: I saw my first Southern Hawker of the year in the wild garden this morning. He hunted up and down the stream for a good quarter of an hour, treating me to a wonderful display of his aerial prowess without ever landing and allowing me a photo. A little later, while I was watching the Azure Damselflies at the pond, he flew up the garden from the stream, executed a smart left turn at the weeping ash, zipped across in front of me, and disappeared over the fence into our neighbour’s garden. He will be back though – of that I’m quite confident.