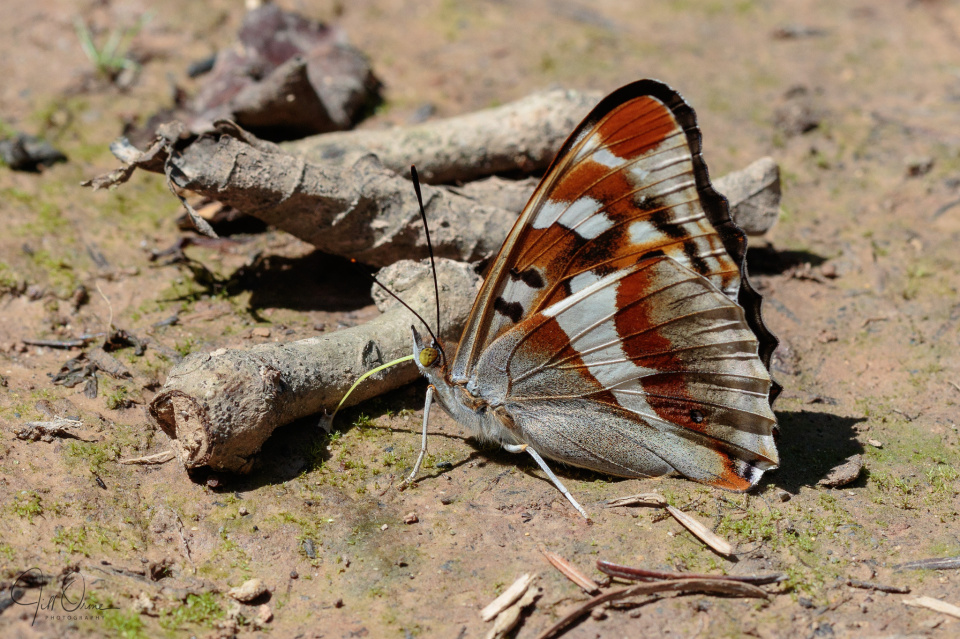 They’re tricksy blighters, Purple Emperors: their habits are unique among British butterflies, and can make them difficult subjects to track down and photograph. Having said that, two of the three I saw in Oversley Wood this morning were quite obliging, so any faults in these photos are down to harsh light and operator incompetence.

This is a female. She’s not really distinguishable from a male by her underwing patterns, but her upper wing surfaces are brown with white banding and red accents, and lack the spectacular purple iridescence that makes the male so addictive to butterfly fanciers. She was down on the ground seeking out minerals and moisture, and was so interested in what she was doing that she completely ignored three humans walking all round her and taking dozens of photos. I have a similar shot taken from the same angle with the long lens, but I’m posting the one she allowed me to step in close for with the macro; if I’d been prepared to join her down in the mud I might have been able to get the tops of her wings sharp too, but my inner hippo wasn’t speaking to me this morning.

The extra is a male, drinking sweat from someone’s leg. One of the odd habits of the Purple Emperor is to suddenly swoop down from the trees where they spend most of their time and land on a random passer by, where they will often then stay until shaken loose. This is known in the biz as “trousering”, but on this occasion I suppose one would have to call it “ankling”. The man selected for favour (or possibly flavour) was initially delighted, because he’d never even seen a Purple Emperor before, but he did eventually get a little tired of standing around while about ten other people took photos of a scene he couldn’t properly photograph himself. (A friend of mine took his email address, and this evening I’ve sent him a handful of my images.) 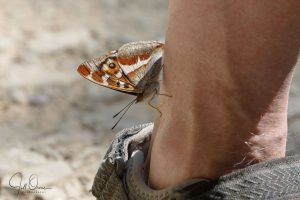 It was roasting in the wood this morning, and by the time I’d been there for an hour I was glowing crimson and had lost about a quarter of my body weight in sweat, so even though I hadn’t managed any good overwing shots of either of the males I decided to call it a day and go home. All today’s specimens were very fresh, so I have time to go back to Oversley again before the Emperor season closes – especially as I see that last year’s Royal Purpleness photo was taken on July 12th. If you fancy seeing Britain’s most talked-about butterfly yourself, now is a good time to be looking for a site, and you might also want to read up on their habits at the excellent UK butterflies web site.

Back at home I spent the afternoon quietly in the wild garden, and was happy to see a male Blue-tailed Damselfly pay a brief visit to the wildlife pond. In sadder news I think we’ve now lost the old male Large Red Damselfly, which I haven’t seen since Saturday, but the area was busy with Azures all afternoon, and if some Blue-tails were to adopt our little habitat as well we’d be up to three Odonata species, which would be highly gratifying.