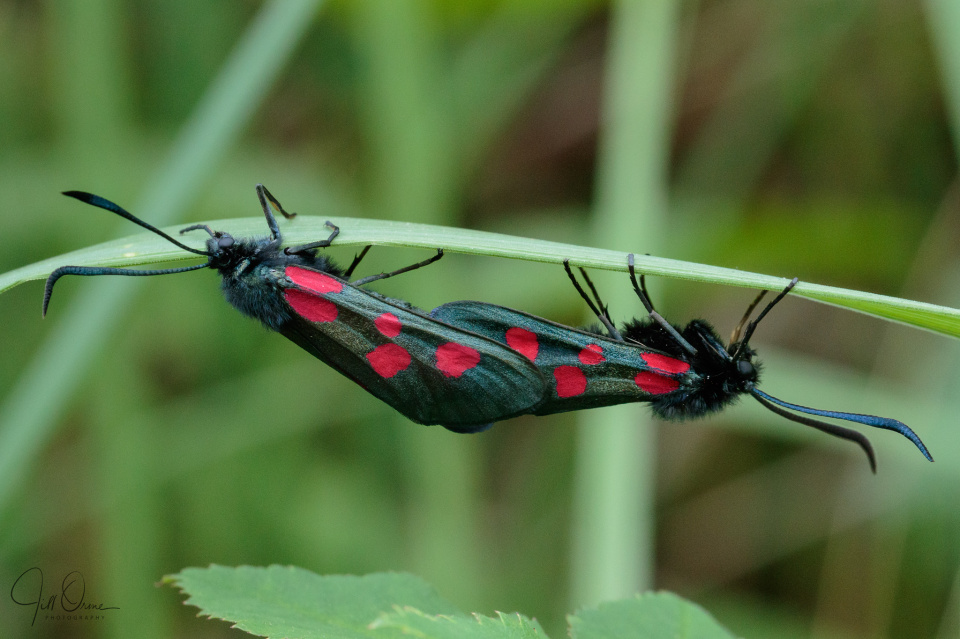 A warm, bright morning tempted me out to Trench Wood, where I happened on these canoodling Burnet moths before I’d gone more than about a hundred metres from the car park. This was lucky, because around the corner from this spot I bumped into some people I know, and I was so busy chatting (and chatting, and chatting…) that I neglected to keep one eye on the sky, and didn’t notice that the weather was steadily closing in.

Eventually we went our separate ways, but by the time I reached the pond it was spitting, and far too dark for dragon photography. I did see my first Brown Hawker of the year, somewhat reprehensibly making off with a tandem pair of Large Red Damselflies dangling from his jaws, but I only managed the kind of record shots that require almost-closed eyes and a hefty application of imagination to interpret. There were no Chasers or Emerald Damselflies to be seen – but maybe they already knew what I didn’t realise until a loud roll of thunder suddenly sounded quite close by.

At this point I decided that dense woodland might not be the safest place to be, so I hot-footed it back to the car, where I sat in what I hoped was a Faraday cage while the storm went over. My Met Office app was telling me at the time that I should be experiencing broken cloud and sun, with only a 10% chance of rain, which was fairly galling, but did seem to suggest that if I sat out the rain better conditions might be around the corner. However the sky had other ideas, and eventually I gave up and returned home; by the time I got here it was raining literally in lumps, and I had to wait in the car till R took pity on me and scuttled out with an umbrella, to shelter me and my gear into the house.

Burnet moths can be tricky to pin down to species, but a local wildlife expert has told me that these are Narrow-bordered Five-spot Burnets. This is the first time I’ve recorded this species, which (despite the weather) is enough to have made this a good day.