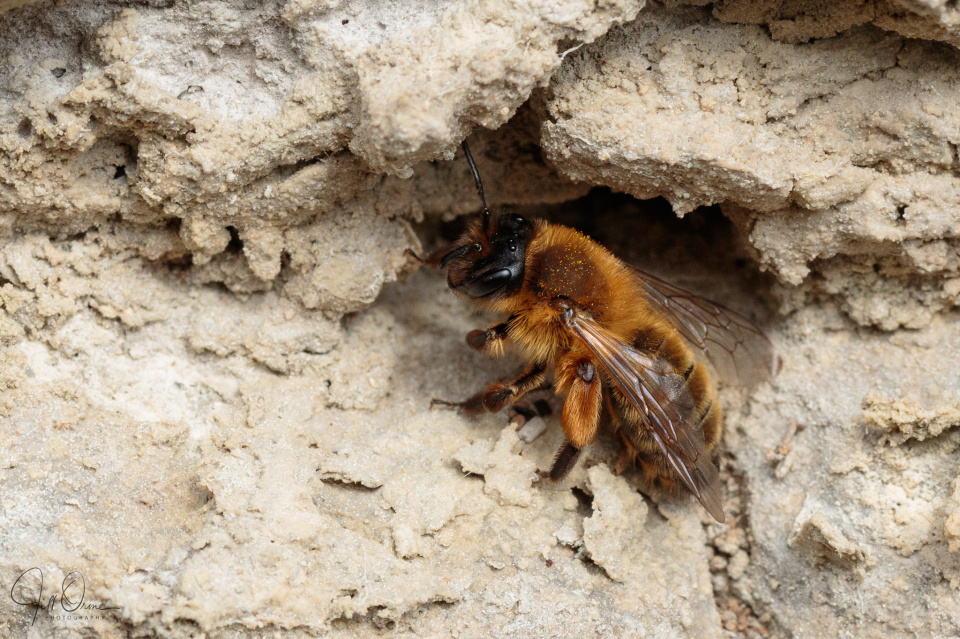 Bee of the day: Andrena nigroaenea, the buffish mining bee.

I’ve always thought the common name was strange: why buffish? Buff is a pale brown colour, and buffish suggests something that’s ‘sort of’ pale brown. These striking bees aren’t ‘sort of’ or even ‘definitely’ pale brown, however, but are quite distinctly ginger. Or tawny, maybe – though that description has already been applied to Andrena fulva, the females of which aren’t so much tawny as red.

I hope you’re paying attention – there’s going to be a test at the end of this period.

Anyway, this very fresh female is about the size of a honey bee, though she appears larger because she’s so furry. There was a male – with similar colouring, but much slimmer and lacking the large pollen brush on the hind leg – hanging around very close to her, which suggests that she may not yet have mated. Also hovering nearby were several nomad bees; both Nomada goodeniana and Nomada marshamella are cleptoparasites of the buffish mining bee, and the females spend much of their time searching for Andrena nests.

Andrena nigroaenea is very common in England and Wales, and has quite a long flight season for a mining bee: they can often be found from March through to July. They’re more likely to nest singly than other miners, and in gardens they nest everywhere from lawns and flower beds through to old walls with crumbling mortar – I almost always find them on this old farmyard wall that I refer to as my bee hotel.

In other news, our Lockdown Pond Project is progressing well. I’ve found a local aquatics supplier that will deliver pond plants by mail, and I’ve ordered some oxygenators and marginals for the patio pond, along with the specialist compost and containers needed to plant them. And R has dug out almost half the depth of hole we need to install the wildlife pond – though the deeper he goes the clartier the soil becomes and the tougher the digging gets, so I don’t expecting that he’ll finish it before the weekend. But I’m very happy that he’s so interested and involved in the whole scheme – not to mention grateful that he’s doing all the hard work!