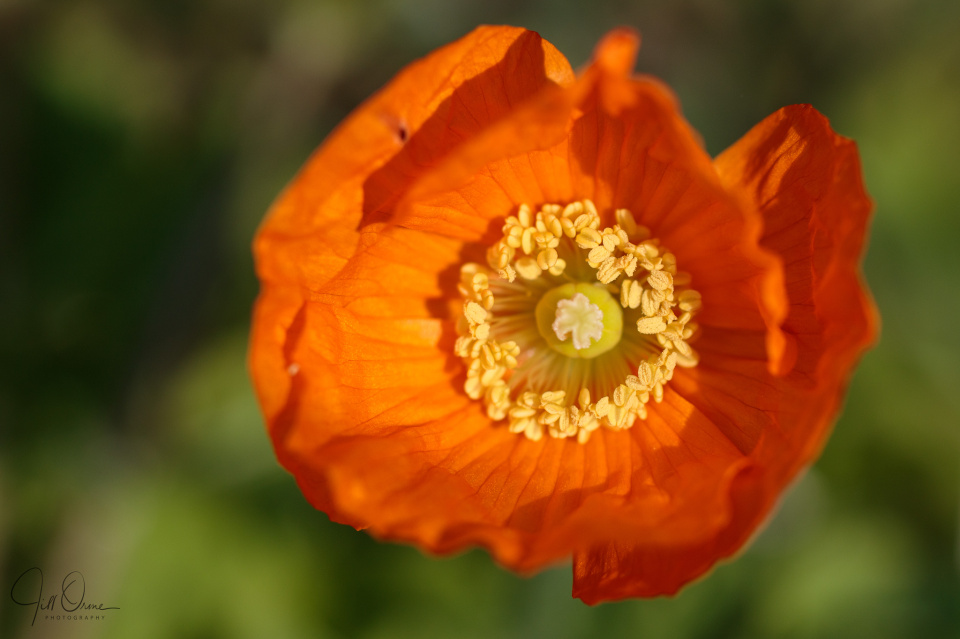 One of the colourful pleasures of spring in our garden is the orange Cambrian poppy that grows on the top of the yard wall. Because the wall is nearly six feet tall it’s not the easiest thing to photograph, so this morning I was very happy when I realised that a seedling had taken in the gravel below it. The surroundings are quite messy, so I used a wider aperture than I usually would for a macro at this distance, in order to blur the background and separate the subject. 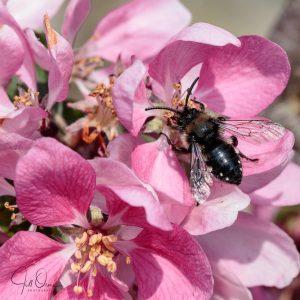 My extra is the first common mourning bee of the spring, nectaring on crab apple blossom. I mentioned a few days ago that the bee and the blossom normally emerge together, but this year they’ve diverged slightly: the blossom is already starting to go over (probably hastened by the run of cold nights we had last week and the week before), whereas Melecta albifrons is out a little later than usual. When I was talking to R about this species recently I described it as a big ugly black and white bee, but at least as far as this male is concerned that wasn’t really fair: he’s roughly the same length as a hairy-footed flower bee, but quite a bit slimmer, and actually I think he’s rather dapper. Females on the other hand, are definitely ugly, being larger and greyer, with a bulging thorax that gives them a distinct hunch around the “shoulders”. They’re a cleptoparasite of my much-loved hairy-footed flower bee, so I may be anthropomorphising here, but they always make me think of Nosferatu.

Lockdown Pond Project update: I spoke to the aquatics nursery by phone this morning, and confirmed that they will be able to supply my order for the patio pond. I confess that I was initially surprised when the owner told me that they won’t despatch it until Tuesday, to avoid it being held up in a postal sorting office over Easter…. because I’d entirely forgotten that we’re now entering the Easter weekend. But anyway, as R said on hearing the news (and after getting over his own surprise about Easter), it gives us something to look forward to next week. He has now done most of the rough digging out for the wildlife pond, and is carefully contouring the hole to match the pre-formed liner. So by the time I’ve planted up the patio pond, I think we’ll be in a position to fill and plant the wildlife pond as well.