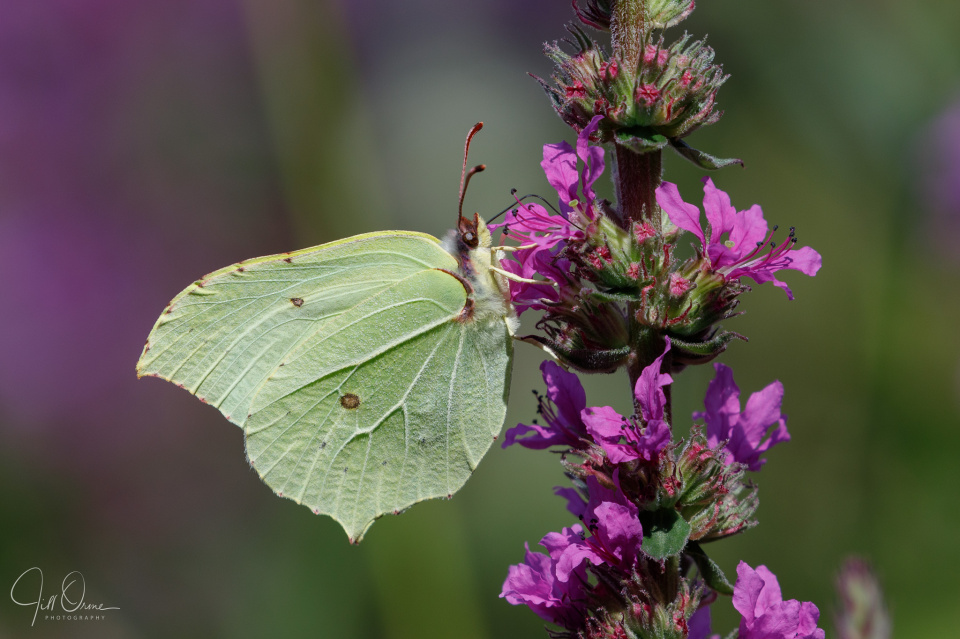 I’m surprising myself here – and this photo will probably surprise you as well, when you hear that I went out after Odonata today, and that many Odonata were in fact photographed. But I find this image very satisfying: I love a fresh Brimstone, and it amuses me that they seem to have a preference for pink and purple flowers, which tone really nicely with their eyes, antennae, and thoracic fur. I’m also happy with the shot technically, which is a relatively unusual situation for me, and that helped it to pip several other contenders to the top spot this evening.

I spent three hours across the middle of the day at Ripple Pits, some old flooded gravel workings on the Worcestershire/Gloucestershire border, which are now the preserve of fisherman, wildlife, and photographers (plus a lot of dogs, not all of them well-behaved, but let’s step around that). I was hoping to see the Lesser Emperors that were photographed so beautifully by Hillyblips last Sunday, but sadly failed to find them. I also didn’t find Hillyblips, or see her car, though it turns out that she was there and saw mine; and though she didn’t spot the Lesser Emperors today either, someone else was there at the same time as we were and allegedly had great views of them. The whole thing sounds a bit like a Whitehall farce, if you’re old enough to remember those, except that they had people rushing in and out of doorways and either meeting each other or not, and this situation involved a lake, with a path around the perimeter – so it’s really quite difficult to visualise us all walking back and forth and waving large cameras around, but managing not to see each other.

Anyway, I’ve posted a set of my favourite photos of the day to my Facebook page, if you’d care to see some of the other things I found; if I hadn’t chosen to blip the Brimstone I would probably have gone with either the mating Blue-tailed Damselflies, or the Banded Demoiselle – who was not only gorgeous, but posed and performed for me for several minutes. One unphotographed highlight was the kingfisher I accidentally disturbed from its perch when I stepped down onto a nearby fishing peg, and which I then had the joy of watching as it flew over the lake in a shimmer of orange and turquoise. Other things I got over the course of my visit included dehydration and sunburn; but for balance, I managed to lose a pair of reading glasses.

Back at home, the wildlife pond was visited by fresh male Azure and Blue-tailed Damselflies, which raised my hopes that we may see more damselfly eggs being laid there before the close of the season. And then at the end of the afternoon, while I was trying to resist being bullied out of the wild garden by our aggressive resident Red Admiral, I was suddenly surrounded by a swirl of dragons, and heard the unmistakeable crinkled cellophane noise of Southern Hawkers wrangling, as the male caught the female and carried her off into the oak tree by the pond. I’m not ashamed to tell you that this made me quite emotional, but I managed to resist the temptation to stake out the pond for the next hour, to see if she chose to oviposit there.