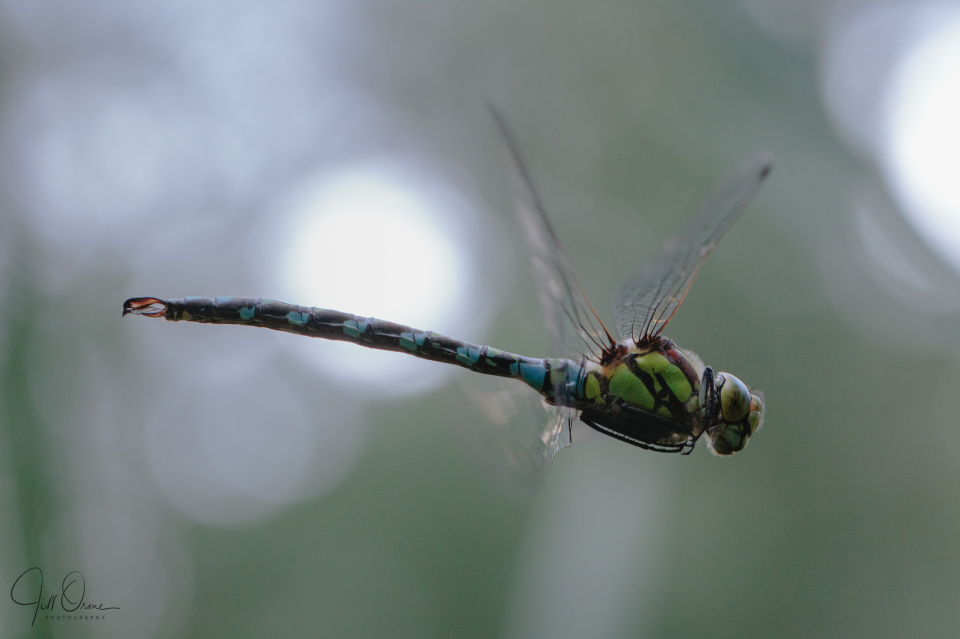 This is one of the strangest photos I think I’ve ever posted. There are so many things I don’t like about it, that I hardly know where to start, but the thing that makes it today’s blip is that it appropriately represents a pretty strange encounter.

So, what happened was that I was rummaging about in the thick vegetation on one side of the pond at Trench Wood, homing in on an Emerald Damselfly that wasn’t at all keen on being photographed, and when I straightened up there was a Southern Hawker hovering a few feet away, watching me. I greeted him in a friendly fashion, lifted the camera to take his photo, and he zoomed off – but every few seconds he’d come back and take another look.

So far, so normal – Southern Hawkers are like that. But then another one arrived to see what was going on, and a bit of a kerfuffle ensued. Again, nothing particularly odd – one of the hawkers retreated, and the other resumed his patrol around me. But the second one came back repeatedly to try to claim the territory, and then a third one joined in, and suddenly I was standing in the middle of a conflict zone, surrounded by the slightly disturbing noise of scrunching wings as they all knocked seven bells out of each other.

When the battle moved away over the pond I decided it was time for me to move on as well, and I turned to go – only to find yet another Southern Hawker (or possibly one of the original trio who’d managed to extricate himself from the fight) hovering just behind me. He came right up in front of my face – it felt as though we were about to touch noses – and then flew around my head quite slowly. Now, as you know, I love these dragons, but there was something so proprietorial about his attitude that I found myself laughing quite nervously, and enquiring, “Can I help you?” At which point he hovered in front of me, a little above eye level, and stayed quite still while I lifted the camera and took this. I’d just like to point out that I was using the macro, and the image isn’t cropped.

Shortly afterwards one of the others arrived back, and kerfuffle broke out again. At this point I said, “It’s been delightful – thank you – but now I really must be going,” and scrambled up a short slope to get back onto the main ride – only to discover that they’d both come too. They flew above me for about thirty metres, and then started bickering again like Tweedledum and Tweedledee, and peeled away to have another battle.