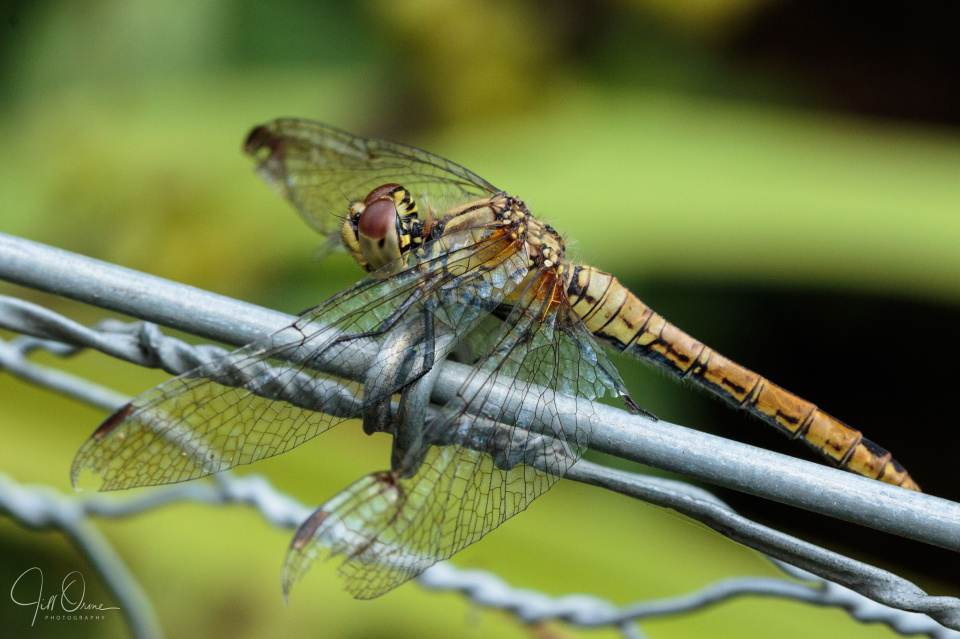 But not uncommon. That is to say: she’s common, but she’s a Ruddy rather than a Common Darter.

The females of these two species are much harder to tell apart than the males, though on the rare occasions that you see them simultaneously, Ruddy females are slightly smaller and slimmer than their Common cousins. The books also say that the black markings on the abdomen of the Ruddy Darter are more definite, but I can’t say I’ve ever noticed that, even when I have photos of the two that I can compare. To my eye, RD females tend to be a duller ochre colour than CDs, their eyes a little darker, and the frons a little brighter. But the real tell-tales are a pronounced black T mark on the top of the thorax, and the fact that her legs are completely black: if she were a Common Darter, the T wouldn’t be obvious, and she’d have a pale stripe along the outside of each leg.

R and I spent what felt like several days this morning changing our energy supplier, and then took ourselves off to Croome for lunch and a walk, to recover. R continued to live up to the billing I’ve given him here as an excellent bug spotter, though I think he was surprised to realise just how small these darter dragons are. Sadly, even R couldn’t find me all the species I’d been hoping to see: not a single Brown, Southern, or Migrant Hawker crossed our path, which is slightly worrying given that we’re now nearly a week into August.

Just as surprisingly (though maybe adding weight to the thought that the season here is running late), there were still a number of Black-tailed Skimmers around, including a copulating pair, plus several Four-spotted Chasers, and a pretty fresh Emperor. We spent several fascinating minutes watching the Emperor quartering the lake, and from time to time being confronted by one or other of the Four-spotted Chasers. This caused me to do several sharp intakes of breath, because I recently saw a photo of an Emperor eating a Four-spot, and was fairly keen not to witness this happening live; but either the Emperor wasn’t all that hungry, or he thought the Chasers were too feisty to tackle, because he just zoomed round them and resumed his patrol, leaving them to fight another day.

On our way back past the house, we heard and then saw several young swallows bickering on a fence; I’ve put a photo of a couple of them here, if you’d care to see it.