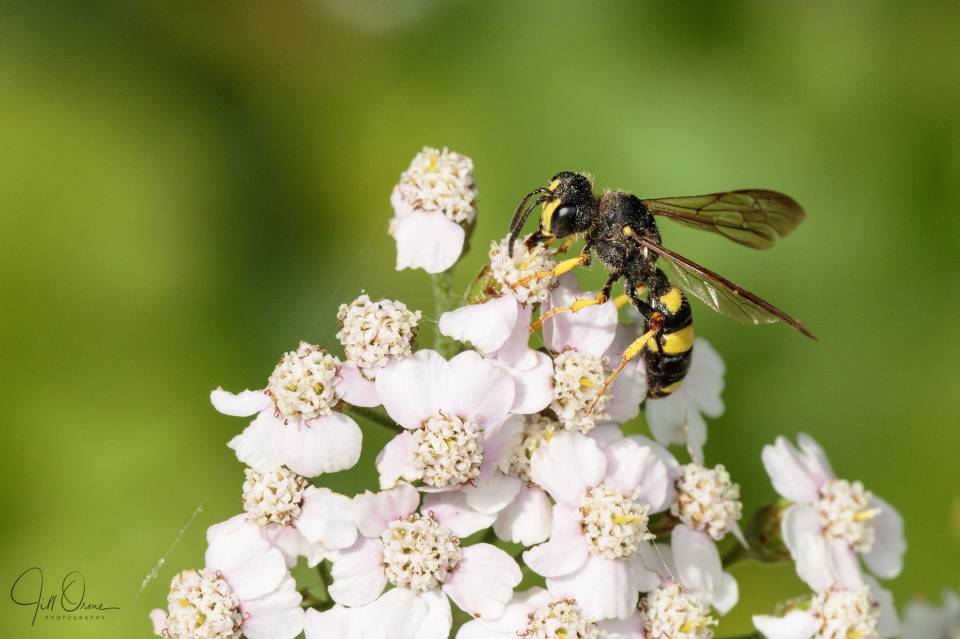 R and I spent some time gardening today (eeeurgh), but eventually I managed to escape, on the grounds of needing to find something to photograph, and the next time I saw him, he was fast asleep over his keyboard. We’re both really struggling to shake off the virus that I’ve now had for a month; R’s only been suffering for about a week, but the symptoms are so similar that it must be the same bug, which gives him every reason to expect that he’s going to be infested for quite a while yet. If you see either of us, we’re probably best given a wide berth.

Anyway, I’d never seen one of these little chaps before, but I was very taken with him when I spotted him on the yarrow. He wasn’t at all interested in me, or in any of the other insects that were trying to feed alongside him, and kept working methodically over the flower heads until he’d covered the whole plant – this made him quite easy to photograph, and me very happy. I’m not even vaguely knowledgeable about wasps, but after trawling through some ID albums on line this evening I had a reasonable idea what he might be, and a few minutes ago one of the BWARS people confirmed the identification as Cerceris rybyensis, the ornate-tailed digger wasp.

C. rybyensis, though technically a solitary wasp, tends to nest in colonies. It’s fairly common through southern and eastern England, though the records become more scattered the further north and west you go, and it seems to be rare in Wales and unknown in Scotland. The female digs a burrow about 10-15cm deep, with short lateral burrows running off it, each ending in a single egg cell, and provisions each cell with prey, usually small or medium-sized bees, which she paralyses with a sting.

I’ve seen some terrific photos of wasps carrying their paralysed prey back to their nests, but they always make me feel terribly sorry for the unfortunate victims. Because of this I was quite nervous on behalf of some of the hoverflies that were swarming around the yarrow, and surprised that the wasp took no notice of them, but now I’m a little better-informed, I know that this is a male: females of this species have huge yellow mandibles, and look quite menacing. Males, on the other hand, play no part in the building or provisioning of the nest, and are therefore free to enjoy a lazy Sunday, browsing the garden flowers for nectar.