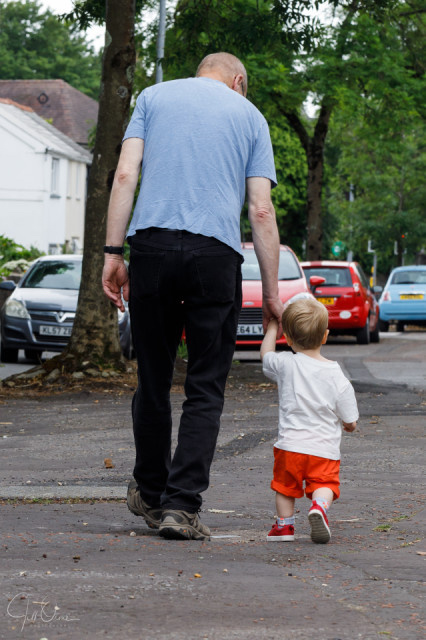 Day one back from holiday. Desperate for a lie-in (because holidays are exhausting) – but no. Off to the Principality early doors, to spend a few hours with Baby B. Which we wouldn’t have missed for the world, by the way, because he’s in that marvellous phase where every day brings new learning, new games, and new attempts at communication, and it’s a joy and a privilege to be a part of the B Team.

As we went off out of the house to drive over to Forest Farm for duck feeding (“A a!!”), R said, “You can walk to the car if you like, but only if you hold my hand.” “Good luck with that,” said L – but as I’ve already noted, the rules are different for grandparents, because they’re a slightly unknown quantity, and a boy can’t assume that he’s going to be able to grind them down, even if he throws his best strop. So R and B held hands, and walked together very nicely along the pavement, I thought.

When we arrived home again, L came out to film the very nice walking, and B being swung up the steps by both grandparents – which was so funny that it had to happen again. And again. And then he wanted more walking, and grabbing my hand began determinedly towing me back down the road, at which point his weary mother said, “OMG – he’s me, isn’t he?”