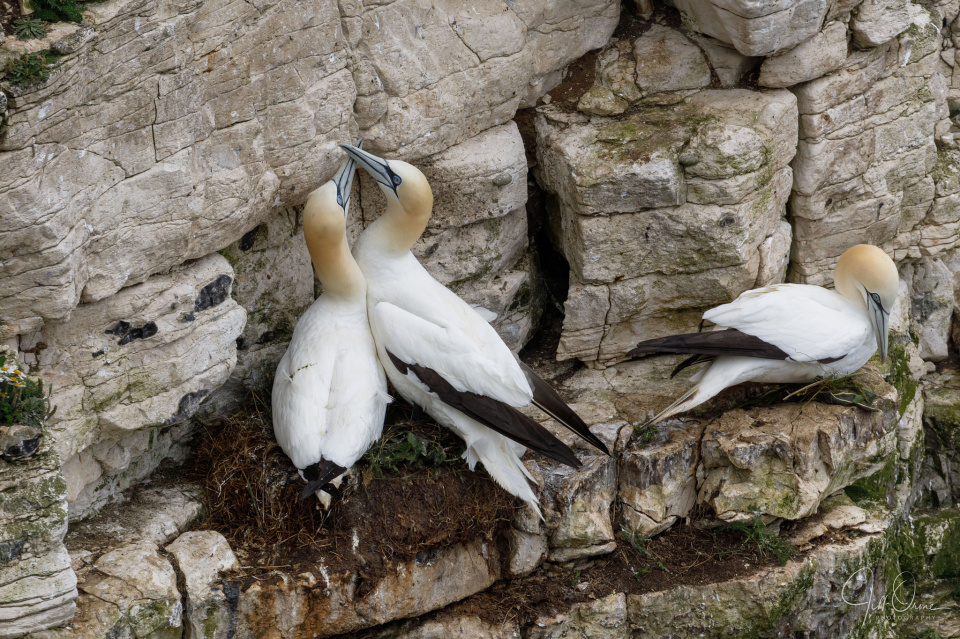 “The function of gannet social life is to allow the fierce to love.”
Adam Nicolson, The Seabird’s Cry

A gannet’s bill is a fearsome weapon – sparring males competing for nest sites can inflict terrible wounds on each other, and scientists who’ve studies the species report that they have an instinctive tendency to lash out at any other creature that comes within reach. So it’s thought that the bonding display in which they cross bills and tap them together is a kind of ritualised fencing or play-fighting, by which each half of the couple shows the other their love and trust: I might take chunks out of any other bird that strays too close, but with you all I’m going to do is pretend.

I arrived at the viewing point too late to see the bird on the right arrive back from the sea – and presumably to feed the chick, which in this image is hidden underneath the left hand bird – but I was lucky enough to see the pair perform this bonding ritual. They also did quite a lot of what’s called sky-pointing, putting their heads back and pointing their bills directly upwards, which is thought to indicate a desire to leave the nest. For several minutes both of them sky-pointed, but then the right-hand bird stopped doing it and tucked its head into its chest, while the left-hand one carried on; this is said to show that the incoming bird has accepted the need of its partner to leave, and is promising that it will stay and brood the chick.

My first extra shows the newly returned bird shuffling behind its mate and displacing it off the chick. The leaver seemed slightly reluctant to go at this stage, but was gradually edged out, until finally it tipped off the edge of the nest and flew – only to circle round and land again a couple of times, as if checking that its baby really was being properly looked after. Finally it went off in search of food, and the remaining parent moved the chick around a little with its bill and then settled down onto it, as shown in the second extra. What you can see there is the bum end of the chick, and I was a little worried that I never actually saw it move under its own steam, but on going through my photos I have found one in which a head is visible, so I think it was probably just too full to move.

I don’t know whether the single bird on the right of my main image is sitting on an egg or brooding a chick – it was certainly behaving as though it was, though its nest looks pretty minimalist – but the new grass and leaves next to it are interesting, because nest building is another important gannet ritual. Nests are established by male birds, and primarily tended by them, but either bird might bring grass, leaves, or seaweed to add to the nest when it comes back to land after a hunting trip. Young males that are trying to find nest sites and attract partners for next year also spend a lot of time collecting nesting material (and bickering over it) along the grassy slopes at the top of the cliffs; the wardens and volunteers refer to these quarrelsome gangs as Gannet Club.