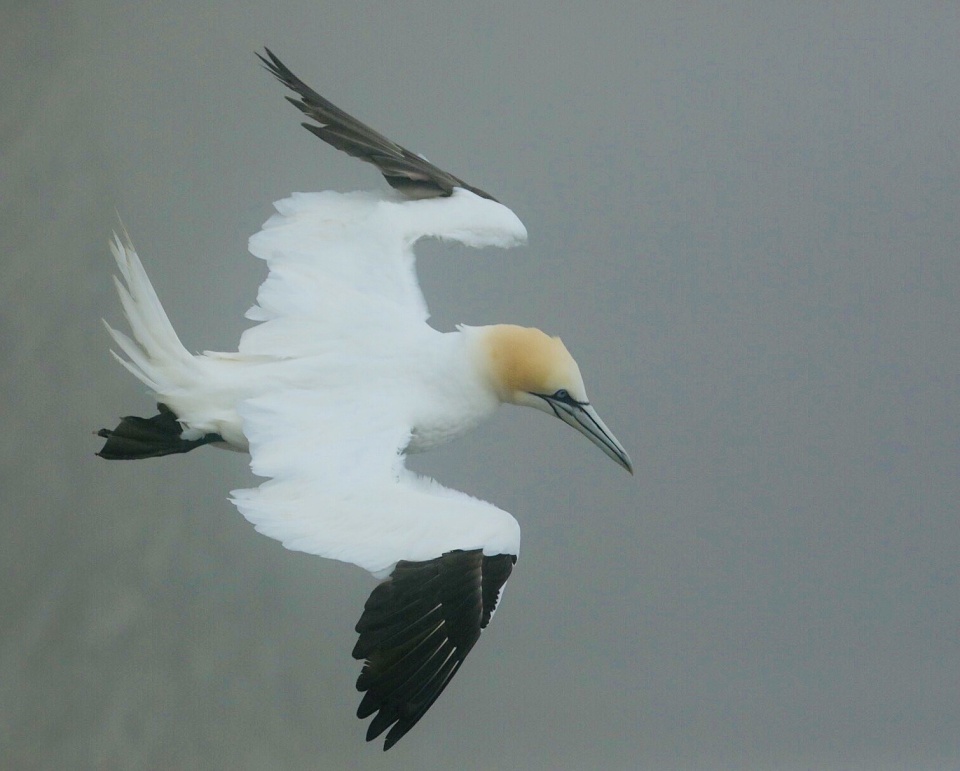 When I decided on Sunday to come up to Yorkshire, the weather forecast for today was reasonably good, but over the course of yesterday it deteriorated, and when I got up this morning it was pouring with rain. Worse, there was a thick fret hanging over Flamborough Head, despite the fact that the north wind was almost strong enough to take you off your feet. But the birds have to put up with it, so I didn’t see why I should skulk indoors, and as one of the volunteers was heading up to Bartlett Nab which is said to be the best viewing point for puffins, I tagged along with him. He was a fantastic source of information, and I thoroughly enjoyed talking to him – in particular he was able to tell me a lot about gannets, a bird about which I knew almost nothing before today.

These are seriously impressive birds – Britain’s largest seabird, with a wingspan of up to two metres. They live on average around twenty five years, but can exceed that by a decade, and a breeding pair will bond for as long as they both live. They don’t usually breed until they’re five years old, but four year old males will start to look for a site to build a nest, and to attract a female to share it with them the following year. They re-use their nests each year, and the platforms increase in height with each season’s building; but where there is a colony young birds are forced to nest on the outer edges of it, and over subsequent years they will try to move further in towards the centre, where there’s less risk to the chicks from predators.

Because of their size, the only birds capable of predating an adult gannet are eagles, but they do lose chicks to gulls and skuas – and within a colony an unattended chick may be killed by another gannet. For this reason they’re extremely attentive parents, each taking a shift of up to 36 hours looking after their chick, while the other travels up to 200 miles from the nest to hunt for food. Their diet consists exclusively of small fish and squid, and on return to the nest the parent will regurgitate this for the chick – semi-digested when the offspring is tiny, but whole by the time it’s ready to fledge. This diligent care over a three month period results in a chick that’s heavier than its parents, and which can’t initially fly: it leaves the nest by throwing itself off, and if it’s lucky glides down onto the surface of the sea, where it survives on its fat reserves while it learns to dive, and strengthens its flight muscles until it’s strong enough to take off. It then heads south, travelling much further than its parents do on their winter migration, and doesn’t return to its natal colony until it’s two years old.

All of this seems remarkably hit and miss, but it seems to be working for the gannet, whose numbers have risen steadily over the past few years. Some of the other sea birds found at Bempton Cliffs aren’t doing as well, sadly – for example, fulmar numbers are plunging, and it’s thought that this is at least partly because they’re ingesting plastic waste, which they can’t distinguish from fish, and starving to death. Kittiwake numbers at Bempton have halved over recent years, and here it’s thought that the problem is the rising temperature of the North Sea: kittiwakes are surface feeders, and their prey is moving deeper to find cooler water.

I could bore on all night about my fascinating day at Bempton Cliffs, but I’ll stop now. But if the mysterious lives of sea birds are as interesting to you as they are to me, I recommend a book called The Seabird’s Cry by Adam Nicolson, which I bought during one of my trips back to the visitor centre to dry out and warm up, and now can’t stop reading. 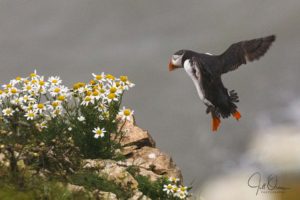 Oh, by the way, both my images tonight show birds working with the hoolie that was blowing. Having steered close to where they want to be, they turn into the wind and hang on it, drifting slowly sideways or backwards onto the surface where they want to land. It’s impressive when you see a big gannet do it, but when it’s a little puffin or razorbill…. well, it made me quite emotional.