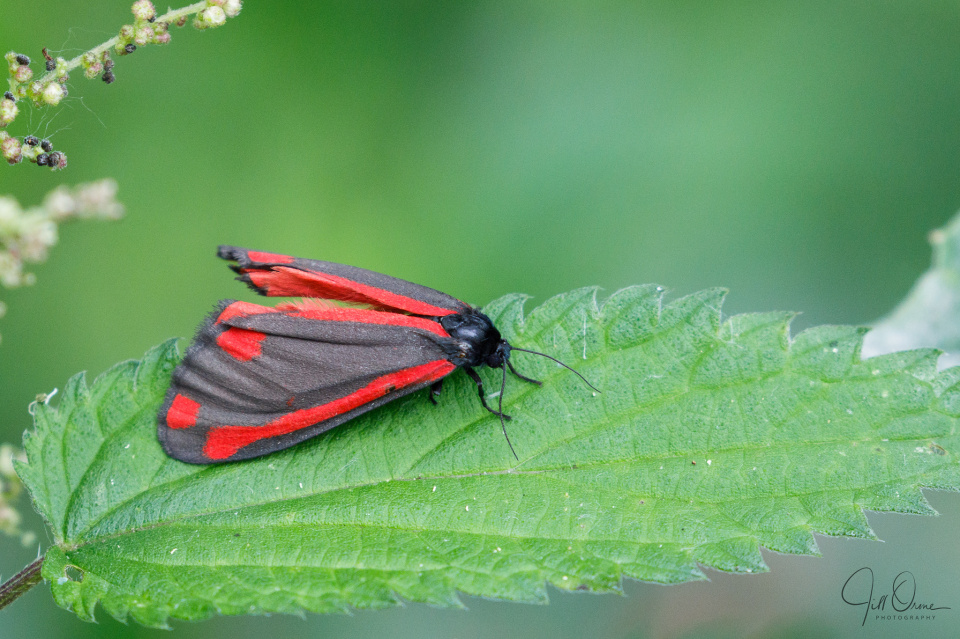 It was a steamy 27 degrees at Paxton Pits in Cambridgeshire this afternoon, and I was carrying a lot of gear. When I spotted this Cinnabar moth, resting on a nettle leaf above a stream, in the shade of some overhanging trees, I realised that I was pretty much the same shade of crimson. Sadly though, it looked considerably less attractive on me.

While R and I were driving between Cardiff and Dyrham Park yesterday, I was bemoaning the fact that it’s over a year since I saw a puffin, and that, given the state of my diary for the next few weeks, I didn’t see that I’d be able to get to a nesting site before this year’s young fledge and the birds return to sea for the winter. “Go tomorrow,” said R. “Just book a hotel room and go.” So I did – within ten minutes I’d made a hotel booking in Bridlington on an app on my phone, and this morning I set off for the Frozen North.

St Neots in Cambridgeshire isn’t an obvious waypoint between the Shire and East Yorkshire, but I was hoping to see a rare dragonfly called the Norfolk Hawker, which can be found at Paxton Pits. This handsome, green-eyed hawker is found in lowland areas of central and Southern Europe, but in the UK it’s confined to the East Anglian fens and the Stour Valley in Kent. I’ve seen several photos of the species from Paxton, but sadly I  haven’t been able to add to them: the luck I enjoyed a few weeks ago, which made me think that this was going to be a good dragon season, seems to have deserted me (temporarily, I hope), and even though one of the wardens gave me very detailed and specific instructions as to where I should look, the best I had were tantalising glimpses of a couple of high-flying hawkers that I couldn’t positively identify.

The day did have some compensations though. I spent a while watching common terns swooping down to one of the lakes to catch fish – something I’d never seen before, and which gave me a real buzz. I also had an amazingly close encounter with a jay, which landed on the handrail of a bridge just a few feet in front of me; I’m not sure which of us was the more startled, but I know who had the faster reactions – as I began to lift the camera, the jay took off and hurled itself over a tall garden fence on the far side of the path, disappearing before I even got my eye to the viewfinder. And of course there was the Cinnabar, which is one of my favourite moths.