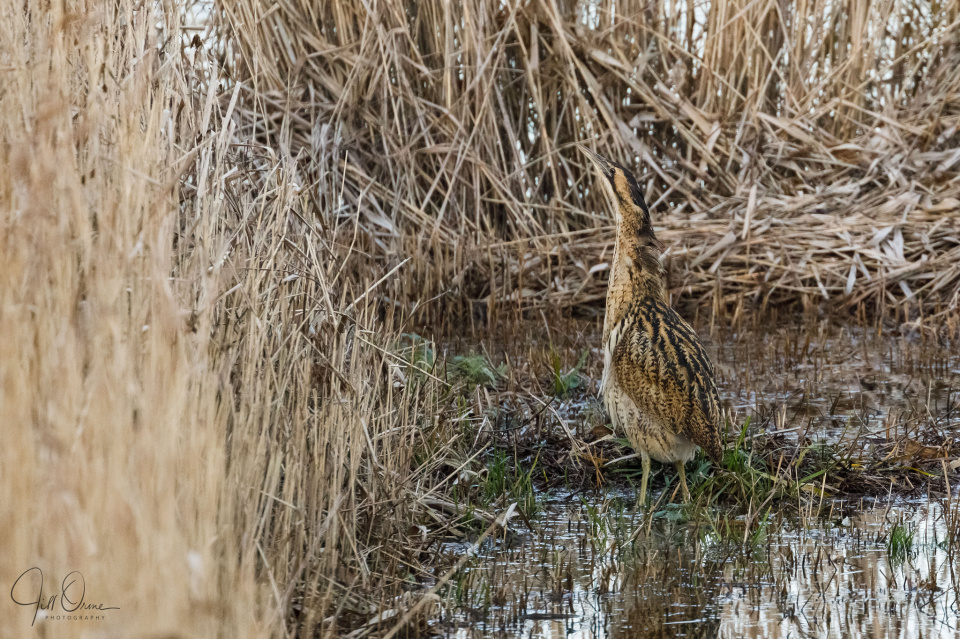 After running errands with R this morning I went on to Brandon Marsh in Coventry, where a Eurasian bittern has been reported over the past few days. Arriving in the hide and discovering it packed with birders, my hopes lifted, but they sank again when I was told that I’d missed the bittern by forty minutes – along with a water rail, a Cetti’s warbler and an otter.

Nonetheless, two kind chaps hutched up to make space for me on the bench, and we all sat elbow-to-elbow for another couple of hours, watching the lake and chatting. I’m still amazingly ignorant about birds – well, it’s not really all that amazing, when I remember that I took no interest in them at all for the first five decades of my life – and I find that I learn a lot in these situations if I listen carefully and ask reasonable questions. Today, for example, I learned how to spot a Caspian gull (very exciting, if gulls are your thing) among an island’s worth of other birds; and on realising that the person to my right was the BoatBirder I was able to get some helpful tips on when to try to see the elusive bearded reedlings at Napton Reservoir.

None of which, however, got me my bittern tick; and nor did the brief flights across the channel in front of us of the water rail and the Cetti’s warbler – neither of which I was quick enough to photograph. It was gone 3.15pm, and the reed bed was in shade, when someone finally said “Bittern!” – and there it was, stomping up the channel, pausing for a look around and a quick shake out of its splendid plumage, and then disappearing through a gap in the reeds, less than two minutes after it first showed itself. I’ve added a photo of it with fluffed-up feathers as an extra. 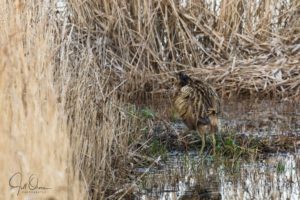 The bittern is often described as Britain’s rarest breeding bird, though as it’s extremely secretive and its plumage provides it with wonderful camouflage it’s not a species that’s easy to count. One of the most effective ways is to count the number of calling males during the breeding season, because the booming noise that each one makes is unique; but they’re believed to be polygamous, with multiple females sometimes found nesting in the territory of a single male, so making an accurate count isn’t as simple as recording the males and just doubling their number. However it is known that they are very scarce – in fact, the combination of persecution (they were a hugely popular “subject” for taxidermists), and shrinkage of the wetland areas where they live rendered them extinct in the UK by the late C19th.

Bitterns returned to East Anglia in the early C20th, and have been hanging on there ever since, though with dangerously fluctuating numbers; and there are now also small resident populations in Lancashire, around the River Humber on the border of Yorkshire and Lincolnshire, and in the West Country. Conservation efforts are concentrating on creating and maintaining the reed beds in which they live, and on the level and quality of water in those habitats. However, conservationists can’t do anything about their susceptibility to bad weather: the number of resident birds falls whenever there’s a harsh winter.

The best time to try to see a bittern, should you wish to, is during the winter, when the UK-resident population is boosted by migrants from Europe*. Even in winter though, the RSPB estimate for the entire country is just 600 birds, so you’ll need to know where one has been seen, which is best discovered from social media. And then you’ll need to be lucky – as I count myself today.

*Insert your own Brexit joke here, if you’re still able to make jokes about it.