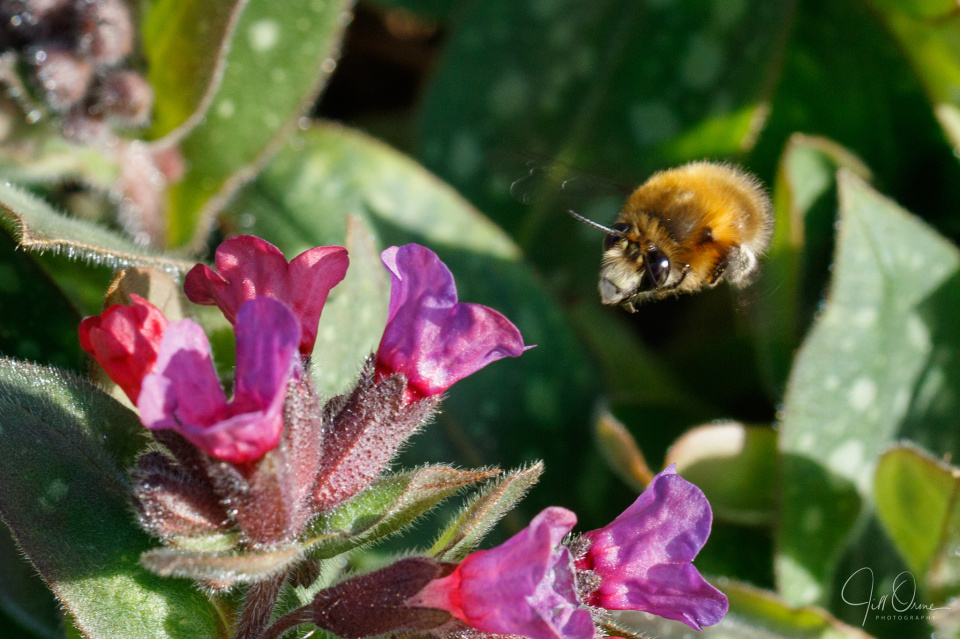 I had a productive day today. This morning I went to Evesham (for the first time since early December, I think), to renew my driver’s licence at the Post Office. I’d been nervous about this beforehand, but the member of staff who served me was highly efficient, and whisked me through the process in just a few minutes. Then, because I had parking time left and was feeling light-hearted after the success of my previous errand, I went to Waitrose and bought some tulips.

Back at home, after R and I had done the supermarket order for tomorrow, he went out for a walk, and I planted up two of my purchases from earlier in the week while I was waiting for the arrival of a delivery. My first thought for a post today was the pink anemone I’d just potted (along with a blue one I’d just discovered living less than its best life on the top of the compost heap); but when I went into the front garden to choose a spot for the allium I discovered two male plumpies feeding from the pulmonaria, so I spent a few minutes chasing around after them instead. I didn’t absolutely nail the focus here, but I like the fact that he’s coming into the flower with his legs still neatly tucked up but his proboscis already extended. The photo I’ve just made into the banner for my Facebook page is recognisable by the patch of pollen on his face as the same bee.

Once my parcel had been delivered I took secateurs, loppers and a long tree lopper down into the wild garden, and tackled the quince and the last of the overgrown apple trees. It was hard work, and some highly creative language was used at times to relieve my feelings, but I got the job finished just before it began to rain. I’m now tired, but pleased with myself, and I’m going to take a large glass of wine into the snug and go with it to make sure no-one disturbs it.